Khabib Nurmagamedov’s Cousin Got Obliterated by a Ludicrous Flying Knee at the ROAD FC Lightweight Tournament in Seoul, South Korea…

Martial arts are a way of life for Khabib Nurmagamedov and his family. The Russian fighter’s father Abdulmanap is one of the most respected coaches in Russia, and holds the pretty awesome title of ‘Master of Sports,’ for his dedication to the art of Sambo.

His son Khabib is one of the most impressive fighters in the world. His ability to take down opponents and brutalize them into oblivion makes him arguably the most feared fighter on the UFC roster today. It’s truly Khabib time, and he seems like a puzzle who won’t be solved anytime soon.

Khabib’s cousin Shamil Zavurov is also a professional MMA fighter, albeit not quite so successful as The Eagle.’ He was fighting in ROAD FC’s lightweight tournament in Seoul, South Korea, and got absolutely demolished by a spectacular flying knee. We’ve given you a GIF as well as a video in case you’re geo-blocked. Watch below.

Zavurov was fighting Mansour Barnaoui in the 32-man lightweight tournament final in Seoul, South Korea under the ROAD FC banner. ROAD FC is one of the most interesting promotions in Asia, with a habit of putting together some truly eccentric freak fights. The Korean group is really growing and their lightweight tournament has been a success.

Barnaoui has pedigree. He’s a former M-1 and BAMMA champion, and he sure made his experience count in this fight. The devastating finish came in the third round. He let loose with a ludicrous flying knee that bounced off Zavurov’s head and sending him crashing to the canvas like a test dummy. It’s as brutal a finish as you’ll ever see. 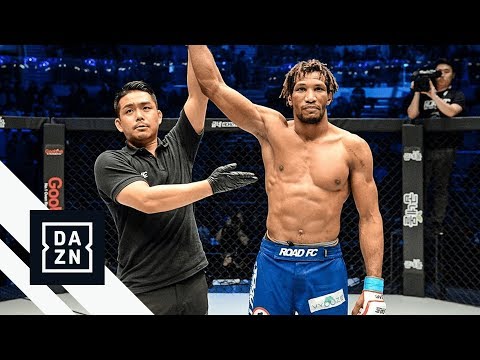 Khabib Nurmagamedov was actually in attendance at the event, as he was in his cousin’s corner throughout the fight. Unfortunately for ‘The Eagle,’ the fight did not go the way they planned it. Barnaoui will now receive the $200,000 cash prize for winning the lightweight tournament.

He’ll also get a shot at facing the promotion’s champion Kwon A-Sol. The winner of that fight will walk away with a cool $1 million. That’s some video game kind of crazy right there. You have to hand it to ROAD FC, they’re really making this tournament mean something.

Zavurov loses by KO to Mansour Barnaoui and lost the opportunity to get 200k US Dollars and face the Champion, Kwon A-Sol in May to 1 Million prizes. pic.twitter.com/rMM7eettWp

There is something incredibly romantic about martial arts tournaments that are perhaps giving the format a moment right now. Bellator have tested the water with their heavyweight and welterweight grand prixs. The problem is that their fights were spread out over way too long a period. They are now set to hold a featherweight grand prix and want to hold each stage of the event over two nights, which could be very exciting.

ONE Championship is welcoming Eddie Alvarez and Demetrious Johnson to their respective divisions with flyweight and lightweight tournaments too. It’s an easy way to make divisions competitive and get some action and talking points. Which divisions would benefit most from a tournament in the UFC? We think lightweight and middleweight would be refreshed by this type of competition.

WATCH: New Training Footage Has Emerged That Has Everyone Worried