What is it with MMA personalities and brawls? We’ve seen it happen with Nate Diaz and Clay Guida recently, but with fighters, you can almost understand. There’s a whole lot of testosterone and monotony in their lives. Sometimes throwing down with a random stranger, or another MMA fighter in public just makes life more interesting.

A lot of the time they’re also just a little bit dumb. They might have taken a few too many punches to the head, or have anger issues, with professional fighting their way of controlling it. Heck, they might even be good at fighting because they’re just a little bit crazy.

However, when you seen MMA managers get involved, you know something crazy is going down. Video footage has emerged of Khabib Nurmagamedov’s manager, Ali Abdelaziz, and another of his UFC fighters, Kamaru Usman throwing down with members of the public at PFL 1, on Thursday. 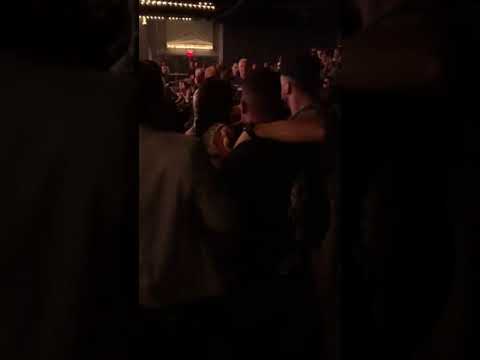 As you can see from the footage above, it was pretty wild. The Professional Fighter’s League, effectively a reincarnation of the World Series of Fighting, made its debut at the Hulu Theater in Madison Square Garden, New York City, last night.

In the video, Abdelaziz and Usman both seem to be focused on a single male. ‘The Nigerian Nightmare’ appears livid, as he is held back, but manages to get in two firm shoves. As Usman turns to walk away, the man pushes him in the back. Boom. A brawl ensues.

Abdelaziz, looking slick in a lovely suit, stands out in the video footage and can be spotted throwing a couple of punches. People try to hold both him and Usman back, but the UFC welterweight contender manages to launch one massive punch. It’s wild stuff.

It will be interesting to see how both the UFC and New York authorities react to this. It’s not inconceivable that both men could be banned from Madison Square Garden. New York has shown that it takes random violence seriously – just ask Conor McGregor. Legal action could follow.

Usman’s behavior could lead him into hot water with the UFC, who has done almost nothing to promote him, despite an eight-fight winning streak in the organization. Either that or they might finally give him a forum because they seem to like bad boys right now.

As of right now, it is unknown why the two MMA personalities got involved in this altercation in the first place. Abdelaziz is one of the most powerful men in MMA. He has a ridiculous stable of fighters, including lightweight champion Khabib Nurmagamedov and former champion Frankie Edgar. He’s also famously outspoken.

Hopefully, he will soon take a break from fighting and get his boy Khabib back in the octagon soon. Last week he revealed that the team is currently trying to cajole Georges St. Pierre back in action. It’s very much a case of wait and see.

Team McGregor Have Their Masterplan Ready to Go