Yoel Romero has officially missed weight for UFC 225. The Cuban superstar was due to fight middleweight champion Robert Whittaker for the 185lb title. Now the title is off the cards and it remains to be seen whether or not the fight will go ahead. The second time around he came in 0.2 lbs passed the limit.

It’s a massive blow for the 41-year-old Cuban legend, who has now missed weight for the second title fight in a row. Last time out, against Luke Rockhold he came in over 3lbs heavy at the first attempt, and couldn’t make the difference after a second try. Despite knocking Rockhold out, he wasn’t eligible for the interim middleweight belt.

Now history has repeated itself. Romero came in almost 2lbs heavy in Chicago and was given two hours by the Illinois State Athletic Commission to try cut the remaining weight. His failure has cost him what must be a final shot at the title. 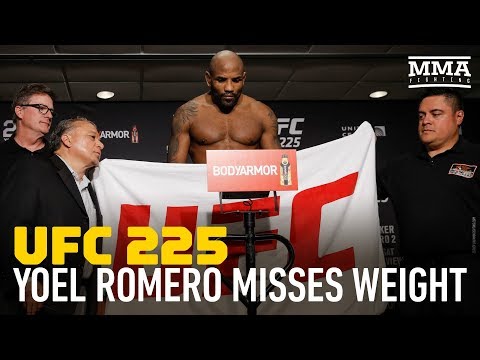 ‘The Soldier of God’ is one of the most recognizable fighters on the UFC roster. Famed for his incredibly jacked physique, he’s a superb wrestler and has knockout power in almost every part of his body. At 41 years old, that’s not helping him to cut weight.

Notoriously he tested positive for a banned substance called Ibutamoren in 2016, around the same time as the new weight-in system was introduced. It’s described as a growth hormone secretagogue, which effectively makes it easier to cut to weight. Romero denied knowingly taking the substance.

Since the introduction of the early weigh-in system, 63 fighters have come in heavy since 2016. 15 of those were in 2018. This year, only one of the 14 fighters (not counting Romero this time around) who went on to fight lost. Many analysts and fighters agree that missing weight and fighting is effectively cheating. Like at Mackenzie Dern coming in 7lbs heavy.

Of course, as you get older it becomes much more difficult to cut weight. Romero is no spring chicken and it’s incredible that he’s still capable of competing at such a high level. He has said that he is considering a move up to the light-heavyweight division. With his career in its twilight years, surely he’ll be making that jump soon. He discussed a potential fight with Daniel Cormier with the media:

Now that he has officially missed weight it remains to be seen whether or not the fight will go ahead. There are two options on the card. Either it is entirely canceled or the fight is simply a non-title fight. Expect the latter because Robert Whittaker has flown almost 20 hours from Australia to be here.

This is terrible for the UFC, who are having a rough 2018 so far. They will not be happy with the ‘Soldier of God’ and expect more criticism of the early weigh-in set up to come.

UFC Fan Gets Worst Tattoo In The History Of Tattoos

Salvador Sanchez - Mar 24, 2016 0
We've seen some pretty horrendous tattoos that were dedicated to UFC fighters, but the subject of today's article transcends the genre. This is not...