The Middleweight Champion, Israel Adesanya reveals that he might weight in lighter than the expected weight for a title fight against Jan Blachowicz. The Last Stylebender is attempting to join the short-listed champions who have held two belts simultaneously.

In an interview with Ariel Helwani, Adesanya said that he might keep the same energy in his past fights. He believes that weight does not win fights but rather skill. If he bulks up his body, his performance might change which he does not want. 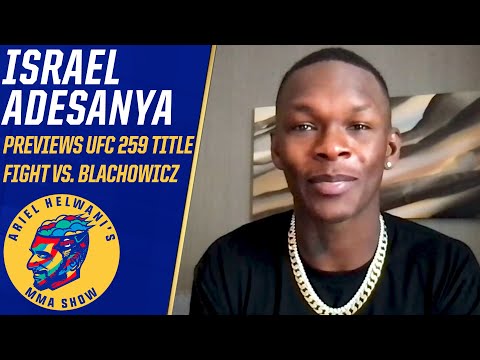 Adesanya also compared this concept on his fight against Paulo Costa. He knew that Costa would weigh in a lot heavier than him come fight night, but he still dismantled Costa with the use of his range and speed. He has said the game plan is still the same which is try to not get hit and come out victorious.

When Helwani asked him what will be his weight on the fight night itself, he responded with an I-don’t-know shoulder shrug. It will certainly be interesting since most champions who attempt to move up weight division, would usually bulk up to not give their opponent a size advantage.

Will Adesanya’s speed advantage be able to avoid all the punches of the polish power or is he too confident on his speed that he thinks that he will be untouchable. That question will be answered on fight night.

There is also a possibility that Adesanya is playing mind games against Blachowicz where he makes his opponent overthink on what type of opponent to prepare for. One thing for sure is it will be known on the weigh in on how heavy Adesanya will weigh.

It is also worth noting that Adesanya has experience on fighting on the kickboxing heavyweight division. He is no stranger to heavy fighters but at the same time, Kickboxing and MMA are different.

No one could tell Adesanya what to do since he himself knows his body better than anyone. The only goal for Adesanya is to get his hands raise, and bring home the belt. As for Blachowicz, it is to steal the hype train and defend his belt for the first time.

Gentleman Jeff - Jun 19, 2016 0
While some fighters are more stealth than others and go about their PED (performance enhancing drugs) use in secrecy, most are sharing sources and...

Ryan Garcia will prove he is a legit boxer if he...

WATCH: Nightmare in Liverpool After Darren Till Misses Weight

UFC Legends All Budding Fighters Look Up To