Some Fighters Just Can’t Get a Break… After a Very Impressive Win, Amateur MMA Fighter Jack Culshaw Blew His ACL Celebrating… He Was Left in Agony and Faces a Lengthy Spell Out of Action…

Nothing beats that sensation of ecstasy when you win a fight. The crowd cheers in recognition of your physical dominance over another human being, and you feel like you’re indestructible right then. That’s how Jack Culshaw felt when he won the other day in an amateur MMA fight in the UK.

Culshaw managed to get his hand raised after a very impressive first-round victory at Almighty Fighting Championships 10, in York, England. He dominated his opponent Zak Edwards, with a blitzkrieg of ground-and-pound resulting in a vicious TKO win.

However, as you can see from the footage below, things didn’t exactly go the way he wanted, as he managed to blow out his knee celebrating. Ouch. That’s definitely got to hurt both his pride and his body. 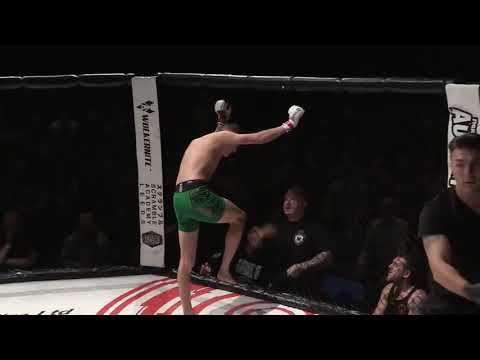 Culshaw is only 21-years-old, but judging from the footage above – pre-injury – he could be on the road to a long and exciting MMA career. He totally overwhelms his hapless opponent, forcing the referee to stop the fight. It looked like the perfect night when he climbed onto the cage and basked at the moment. But then he jumped back down and busted both his knees.

“I went and had an X-ray and there are no bones broken, but do you know the patella, the kneecap? That’s been twisted around and they think my ACL is blown,” Culshaw explained. “We’ll have to wait and see, but they have to look at my other leg too, the left leg, they said that knee could go as well. So when they’re done with the rehab on my right leg, they’re going to have to do my left leg as well.”

This is a serious and debilitating injury. It’s a soccer player’s worst nightmare because it will basically rule them out for a season. Usually, it will take 6-9 months to be totally rehabilitated, unless you’re an absolute freak of nature like Tony Ferguson.

“It popped straight out just then. I thought, ‘I’m not going down now’, so I did a roll and I got back up,” he recalled. “I put my foot back down again and my knee went out again. It went out four times that night. I’m loving it, to be fair,” said Culshaw, who is optimistic of a return in 2019.

Despite his bad luck, Culshaw is actually taking his injury very well. He’s pragmatic about the situation and recognizes that his name is getting out there. As the internet has picked up on this story, he becomes more well-known – more so than had he just won the fight. The young fighter explained:

It’s a very positive attitude from an exciting young fighter. We wish him well.

Gentleman Jeff - Apr 18, 2017 0
Absolutely brutal video... There was a snap, a gasp, and feelings of regret coming out of the ADCC West Coast Trials this weekend. The ADCC...

Robbie Lawler vs. Donald Cerrone No Longer Happening At UFC 213