After almost three years out of action, the time is nigh for Nate Diaz’s return to the octagon. Against all expectation, he’ll be taking on former lightweight champion Anthony Pettis. The two men will face off at UFC 241 on August 17. The former lightweights will be fighting at 170lbs.

Pettis is coming off the back of an exciting win over Stephen ‘Wonderboy’ Thompson. He completed a stunning comeback with a superman punch off of the cage, after getting dissected for much of the fight. Meanwhile, Diaz’s last fight was a rematch against Conor McGregor back in 2016.

Now the Californian has some strong words about his former rival, as well as lightweight champion Khabib Nurmagamedov. He’s also explained why he’s staying at welterweight instead of making the cut back down to 155lbs, one of the most competitive and congested divisions on the roster. 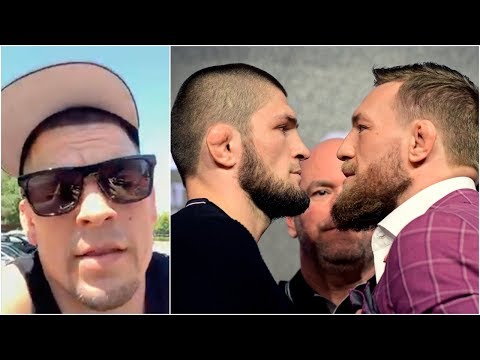 Diaz explained to Ariel Helwani that he didn’t want to make the cut down to lightweight anymore. Despite five losses in the division, including defeats to the likes of Benson Henderson and Josh Thomson, Diaz claims to have conquered the division. Alright so.

“I’m just done with the 155 thing. That’s in the past now,” Diaz said Monday on Ariel Helwani’s MMA Show. “I think it’s time to start fighting at a more comfortable weight class. There’s nothing for me there, I already did everything, beat everybody.

The younger Diaz also went into detail about why he has no respect for the UFC lightweight champion Khabib Nurmagamedov.

“Khabib, I already slapped him in his face, I already told you guys that. And I beat Conor before him, quicker than him, easier than him,” Diaz said.

“He’s a little big-headed right now. I don’t need to fight him anyway because I already got a victory over him,” he continued. “So he’s just gonna hide out and play champ and act like a good guy and f—ng Mr. F—ng Humble F—ng Khabib. I’m not buying that sh-t.”

Many believe that Diaz was waiting for a trilogy match with Conor McGregor. After three years on the sidelines and a recently-born child, he grew tired of waiting. Now he’s set to make up for lost time:

“I don’t need to sit around here and f—ng chase nobody,” he said. “If anybody needs to do any chasing, they gotta come this way. So I’m gonna retire that vision as champ.I slapped both Conor and Khabib so how did that make anybody a winner?”

“The reason why he (Khabib) got slapped was because he was not humble and not this nice guy,” Diaz said of the Dagestani fighter. “He was sitting there with his friends, trying to get a fight with me, taking a picture of me, making fun of me. And so I capitalized and told him ‘F—k you!’ and I slapped him in his face and he was spooked for his life.”

WATCH: Nate Diaz is FURIOUS With The UFC… May Never Fight...