Wow! No wonder the commentators were going berserk…

Muay Thai is one of the most dangerous sports ever. Featuring knockouts and injuries that would make the average sports fans head spin, Muay Thai is not for the feint of heart. This weekend showed just that.

MAX Muay Thai is a growing Thai boxing promotion, and showcases some great talent in their rankings. Just today we saw one of the craziest fights you could ever imagine, featuring a former Ultimate Fighter contender.

The finish came when both men landed strikes at the very same time, resulting in a rare double knockout. Price was able to beat the count, just, and thus got the win. 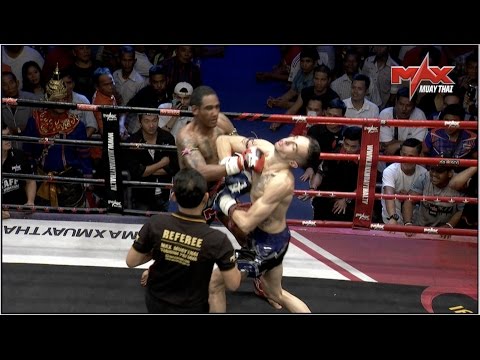 That really was crazy. Here’s a cool interview from UFC.com with Dorian Price:

“It was behind the kitchen with roosters and lizards crawling in the room,” Price laughs, but it was still his dream coming true in a way, as he now had the opportunity to train and compete in the homeland of the sport he loved, Muay Thai. Dreams don’t always have to be glamorous, and this certainly didn’t fit that bill, but Price was never one to chase a dollar.

“Money’s only good in case you don’t die tomorrow, so getting quick paydays, there are easier ways than that.”

One of those easier ways – if you could even call it that – for Price would have been to remain an active fighter in mixed martial arts. Owner of an 8-3 record on the local MMA circuit from 2002 to 2007, Price got a fighter’s opportunity of a lifetime when he was chosen to compete on season six of The Ultimate Fighter in 2007.

As a member of Team Hughes, Price received more attention for a confrontation with a cameraman during filming in Las Vegas than for his loss to Matt Arroyo on the show. But he learned a lot about the fight game, made some friends, and on the season finale show in December of 2007, he was brought back to face Roman Mitichyan.

Price was submitted in 23 seconds.

But here’s where it gets interesting. In the fight game, the UFC name carries the most weight of any promotion in the world, and even if you’re not on the roster, the phrase “UFC veteran” or “Ultimate Fighter veteran” means higher paydays on the local circuit. So Price could have cashed in on his reality TV and UFC notoriety to continue fighting. Sure, his ground game wasn’t at an elite level, but he knew enough to get by, and with a top-notch striking attack, he not only would have picked up some decent paydays, but he might have even won enough fights to get called back to the big show. He didn’t do it though, fighting just once more in 2012, losing to Ryan Bigler.

“So I had no desire to come back to MMA,” he continues. “I got further than I thought I’d get with my skill set and lack of wrestling, and I tried it one more time in the PXC to see, but there wasn’t much of a desire to go back. MMA is a sport where your heart has to be in it. If your heart’s not in it, you’re gonna get hurt, and that’s essentially what I would have been doing, and I’m smarter than that.”

“It takes more than what people realize to be in the UFC,” he said. “You have to be more than a fighter. You have to be able to handle the spotlight because essentially you become a rock star and everything you do is put in the spotlight, whether it’s good or bad. And if you’re not prepared for that stuff, it can eat you alive.”

Darren - Jun 10, 2018 0
Robert Whittaker and Yoel Romero Headlined UFC 225 Last Night... The Result Might Have Been The Same But The Action Was Different...  After all the...