It turns out that spitting at Artem Lobov wasn’t enough for Paulie Malignaggi. After proving that he genuinely dislikes the Russian fighter, he launched an astonishing tirade at the MMA world.

“Lobov and the mixed martial arts community have really disrespected my sport in a lot of ways; boxing, saying that we fight with pads on and it’s not a real fighting sport and what not, but we have all the deaths,” Malignaggi told FightHype.com. 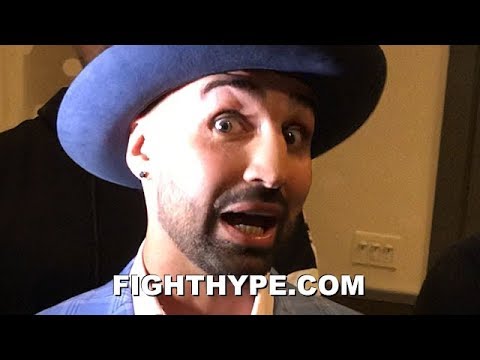 Malignaggi is obsessed with Conor McGregor and used the Irishman as an example of why boxers are supposedly tougher than MMA fighters. He said:

“I don’t care how many 360 roundhouse kicks you can do, at the end of the day you can just [tap] and it’s over. In boxing, if you sit on your stool, you’ll never live it down the rest of your career. . . In MMA, Mr. Tap Machine Conor does it every fight. He’s done it what, three out of his last four fights? He’s not Notorious McGregor, he’s tapout McGregor but at the end of the day, he’s still the biggest star there.

It’s more accepting to save your life. . . In MMA, they praise these guys. He’s over there selling whiskey and people are buying it. In boxing, if a guy quit as much as this guy quit and he tried to make any product, they’d kick him in his ass and say get the f*ck out of here with your bum product.”

‘The Magic Man’ also insists that he will feel no remorse if he puts Lobov ‘in a coma.’ This comes a week after Deontay Wilder said he’d like to kill an opponent one day. Once again Malignaggi demonstrates as much class as a drunken Donald Trump in a strip club.

“At days’ end, the reason for me to say ‘Put him in a coma’ or ‘kill him’ or whatever, listen, you don’t ever want, wish bad things on anybody, but honestly, would I feel bad if he wound up there? No, I wouldn’t feel bad because he disrespected all of the families and all of the people that I’ve known personally who have gone through this,” Malignaggi said.

“When your piece of sh*t community and your piece of sh*t people talk about ‘we fight with pads on and now you’re in a dangerous sport like MMA,’ when nothing of the sort happens to you which is why you have a circus of a fanbase because it’s like wrestling. At the end of the day, no matter what happens to you guys, tapping assures you you’re gonna see that guy next week.”

The New Yorker does have a point in that boxing does have a higher damage rate than MMA because of the sustained head trauma that fighters take. However, he’s definitely being a bit of an idiot about it. He said:

“Fighters risk their lives, no matter what combat sport they’re in. You’re risking your life getting in there, bro. Your life can change in one night. But no other sport does it change like boxing. Boxing does it to everyone and boxing does it at all levels, from the lower level to the world-class level. . . So there’s a reason that I talk the way I talk around this piece of sh*t and around the piece of sh*t people that he has around him.

Five Facts You Didn’t Know About the UFC

Yoel Romero is about to make his Bellator Debut on Sept...

Jake Paul tweets he is a RETIRED boxer after win against...