Ronda is back with a vengeance. The former UFC bantamweight champion has finally signed on the dotted line for the WWE. She’s officially a professional wrestler now. Rousey made her second televised appearance at the Elimination Chamber show in Las Vegas last Sunday. Once again she managed to steal the show.

The American is famous for being the main reason UFC President Dana White decided to open up the organization to women. He saw how destructive she was under the Strikeforce brand, and recognized her star potential. The former Olympic medallist has also featured in the entertainment industry. She has appeared in action films like The Expendables 3 and Furious 7.

Needless to say, Rousey got a starring role at Saturday’s signing-on segment. WWE executives Triple H and Stephanie McMahon were involved, as was Kurt Angle, turning her moment in the limelight into the global news. As expected, ‘Rowdy’ looks set to be a massive star for the WWE.

EXCLUSIVE: @RondaRousey is all smiles as she looks ahead to signing her #RAW contract tonight at #WWEChamber! pic.twitter.com/7HDoCLvAe6

It all began with Triple H and McMahon praising and showing respect to Rousey before she signed the contract. However, all was revealed when it became clear that this was just a plan for the gruesome twosome to get Rousey under their control. They haven’t forgotten her embarrassing them at Wrestlemania 31 way back in 2015.

Things got physical and the spectacle was made even more special when Rousey picked up Triple H, smashing him into a table. Scripted though it may be, the sheer physicality of Rousey will surely help to make her a fan-favorite in the future. She then signed the contract before dropping it on Triple H’s prone body.

Matters escalated when an outraged McMahon strode over to Triple H and slapped Rousey across the face. The sound of the connection between hand and face rang throughout the arena, but ‘Rowdy’ Ronda just stood and glared at her new adversary. Without a doubt, it was all very entertaining.

Allegedly her first match will be a big one. Kurt Angle will partner Rousey against Triple H and Stephanie McMahon. Rousey is still very green on the mic, but it’s fair to say that she is seizing the moment. WWE is challenging in a lot of different ways to the UFC. 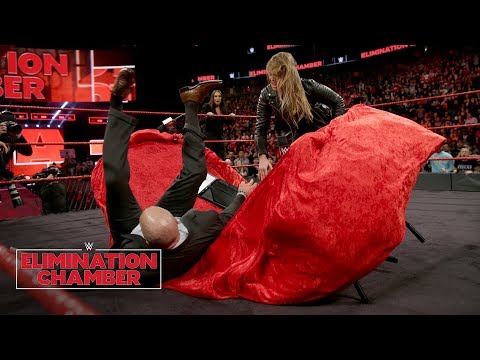 It was also nice to see that a few current and prominent UFC fighters were there cheering Rousey on. Daniel Cormier, Michael Chiesa, and Cain Velasquez were all there to cheer her on, along with her husband, Travis Browne. They could be heard chanting her name along with the rest of the euphoric crowd. It’s fantastic to see the respect that she continues to have amongst fighters from her previous organization.

We still don’t know what sort of character Rousey will be for the WWE. Despite her undeniably badass behavior, she’s never been the most charismatic media presence. If she hopes to prosper in professional wrestling that is something that she will have to work on. Fingers crossed though that the biggest female combat sports star ever gets what she has worked so hard for.

Darren - Oct 5, 2018 0
It Wasn't Just Conor McGregor And Khabib Nurmagamedov Getting Up Close And Personal at the UFC 229 Official Weigh-Ins... Two Fans Went to War...

WATCH: Nick Diaz Explains How He Was Jumped by Thugs

PIC: Jon Jones is MASSIVE After One Year Without Drug Tests…