It’s a match made in heaven really. Ronda Rousey is a name that is synonymous with combat sports. An Olympic bronze medallist judoka turned UFC legend, ‘Rowdy’ is a pioneer for women’s martial arts. While the game might have moved on since she was in her prime, there’s no doubt that she paved the way.

So you can see why Warner Bros. decided that she was the perfect choice to lend her personage to one of the most famous original characters in the iconic Mortal Kombat series. Notoriously violent and gore-filled, the series has been around since 1992 and has since expanded in various forms, both in 2D and 3D, with a whole host of characters.

Mortal Kombat 11 arrives on April 23rd. You can watch a trailer below for the eagerly-anticipated game, and see Ronda Rousey herself discuss her own delight at being able to play one of her favourite characters. 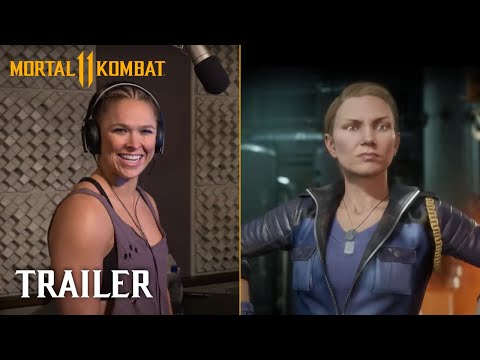 Rousey is a very appropriate choice to personify Blade, because of her physical resemblance to the character, and her own real-life combat experience. She’s definitely true to the character. In the footage, you can see Blade impaling enemies on spikes and brutally beating them in a number of gory ways. It’s hardcore. Rousey said:

“This is a dream come true. I tried to grow up to be Sonya Blade, as close as I could. Now instead of being the closest thing I can be to Sonya Blade, I am actually Sonya Blade.”

You know you’ve made it when you’re starring as a video game character that you love.

While Rousey’s UFC career ended very badly for her, with consecutive KO losses to Holly Holm and Amanda Nunes, there’s no doubt that she’s in a much better place now than she was back then. She’s under way less pressure than she used to be and is away from her toxic former coach Edmond Tarverdyan.

She’s already established herself as a star in the WWE. While she can be a little bit awkward on the microphone, she does look incredibly intimidating and is one of their most natural athletes when it comes down to business. It’s onwards and upwards from here.

Rousey’s film career is also burgeoning. She’s never going to win an Oscar, but if you need someone to play a woman who can kick ass, there’s not many better than her. She’s following in the footsteps of another MMA pioneer in Gina Carano.

It’s also interesting to note that the original creators of Mortal Kombat, Ed Boon and John Tobias, had an idea for a game starring John-Claude Van Damme as the main character. Maybe we’ll see more combat sports athletes appearing in video games. Conor McGregor has already had a cameo in Call of Duty: Infinite Warfare. As MMA develops more stars, opportunities will open up for the likes of Israel Adesanya and other young, exciting fighters.

Darren - Sep 7, 2019 0
Khabib Nurmagamedov Proves That He is the Best Lightweight on the Planet... He Crushed Dustin Poirier in Three Rounds to Become Undisputed Lightweight Champion...