In the US and Western Europe, security guards aren’t always taken very seriously. We’ve all seen that Paul Blart movie, Mall Cop, and it pretty much sums up the stereotype. However, it isn’t always like that – especially in when you go east to Russia.

Russian security guards are omnipresent. Everywhere you go, from high-end boutiques to budget stores, they’ll be there watching you like a hawk. Many of them are former servicemen, highly trained in hand-to-hand combat. They can also get away with a bit more brutality than in the US. You don’t want to mess with them.

In the video below, some absolute morons decided that yes, that’s exactly what they wanted to do. Watch as a massive brawl in a supermarket ends extremely badly for some shoplifting thugs, who get punched and kicked into the next dimension. 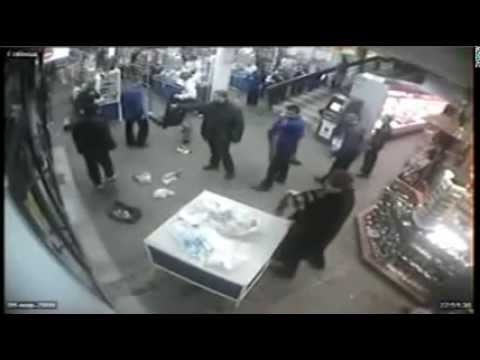 In the CCTV footage above you can see four men in black jackets, who are talking to some security personnel in the mall. While we’ve no idea what’s been said, some more security comes forward as back up. There’s clearly tension in the air that’s punctured when one of the goons in black throws a sucker-punch at a security guard.

Three of the attackers end up laid out on the ground, with no idea what just happened. The caption of the video is ‘don’t shoplift in Russia.’ If there’s a lesson for everybody reading and watching this today, ladies and gentlemen, it’s just that. Do not get caught up in some shopping mall brawl in Russia, because the security doesn’t care if you’re friend or foe. You’re in the way so you’re getting taken out.

The footage might be grainy, but it definitely shows clearly that you never can tell how much training people have. Many upcoming professional and amateur fighters work as security to pay the bills. It’s very possible that some of these guys could be doing just that. Don’t mess with people who are being paid to put their bodies on the line.

You also have to admire the restraint and efficiency of the security guards. Well obviously apart from the one who laid a vicious kick into one of the guys lying flat out on the ground. Despite a number of shoppers passing through the brawl, they manage to avoid causing excessive damage to anybody else.

It’s a sharp co-ordinated defence. It’s time for Hollywood to make a ‘MallCop: Russian Spetsnaz Edition’ because it could be a lot more entertaining than that Paul Blart muck.

Five Fighters Who Got Fired For Drug Use

Gentleman Jeff - Jul 14, 2016 0
The UFC has its own set of rules as to when fighters will get fired. For instance you can fail drug tests repeatedly, even...

Five Reasons Conor McGregor Should Not Be Fighting Eddie Alvarez