Justin Bieber must be regretting that tweet now. He famously called out Tom Cruise for an MMA fight a couple of weeks ago. He didn’t expect Conor McGregor to jump on board about ten minutes later and offer to promote the fight. You can almost picture the dollar signs jumping out of the Irishman’s eyes like the bat-light.

Naturally, Bieber doesn’t actually want to fight Cruise. If you put the two of them side by side, it would be fairly obvious who would win. Cruise would probably drop Bieber on his head. It should happen but it won’t happen. Dana White has also got excited by the idea and offered to put his backing behind the two men.

Now that Tom Cruise has maintained his dignity and not even responded, another celebrity has got involved. Jackass star Steve-O is more than happy to take on Bieber. Check out the message below. 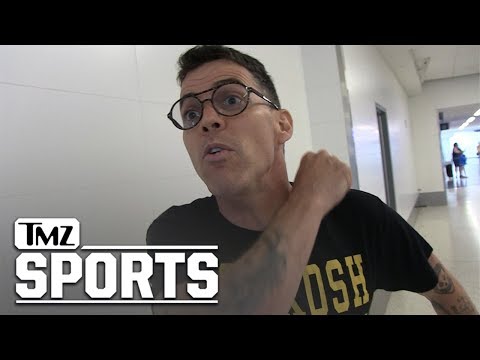 The 45-year-old actor and stunt performer is more than happy to take on Bieber. He told TMZ that he’s even spoken to Dana White about fighting the Canadian pop star. He seems genuinely put out that nobody has called him out yet.

“I’m sick of being overlooked for my potential as a cage fighter, alright?” he said. “And with Justin Bieber trying to pick a fight with Tom Cruise, I really don’t think Tom Cruise is up for it. I had a little chat with Dana White. And he agreed that if Tom Cruise doesn’t step up, and someone needs to fill the cage with Justin Bieber, then I’m the guy. We shook on it, me and Dana White.”

Right now, he’s one of the biggest pop stars on the planet. That’s brought him into contact with a lot of people including Floyd Mayweather. There are multiple pictures of the pair hanging out and training together in the legendary boxer’s Las Vegas gym. Bieber also has BJJ experience and says that he’s a Karate black belt. He called out Tom Cruise:

“I wanna challenge Tom Cruise to fight in the octagon. Tom if you don’t take this fight your scared and you will never live it down. Who is willing to put on the fight?”

Alright, good luck with that mate. Cruise, to his credit, is way above this and has not responded in any way. We don’t blame him. If you’re a Hollywood megastar you’re not going to indulge the peasants are you?

Bieber is clearly a master of the obvious. He realizes that if Tom Cruise was serious about fighting him, he would be doomed. There’s not a chance in the world that Bieber would beat him. Cruise is the type of lunatic who has broken limbs doing his own stunts. He’s also got all that crazy Scientology stuff driving him. The dude probably has magic powers from it. Bieber bluffed out, saying:

“Man… I was just playing, it was just a random tweet I’m pretty sure Tom would probably whoop my ass in a fight. I’d have to get super in shape, I’m really skinny right now. I think he’d probably be out of my weight class. He’s got that dad strength.”

What are the chances of him fighting Steve-O?