Some people are just born tough. It took less than twenty seconds for West Virginia State Wrestling Champion Cassandra Thorne to realize that she was in over her head against a local hillbilly who was, of course, named Saphyre. The Southern Belle took on the toothless hillbilly in a high production boxing match that ended very badly for Thorne.

We came across this fight after SBG Ireland Head Coach John Kavanagh posted a link to it in his Instagram story. We’ve got to thank Kavanagh for bringing this beautiful match to our attention because it is is truly something special and we know you’re going to love every second of it.

Check out the footage below of this crazy and colourful battle. The intensity on Saphyre’s face, her total hillbillyness compared to Thorne’s clean-cut college athlete look is what combines to make this absolutely extraordinary. Enjoy the full fight. 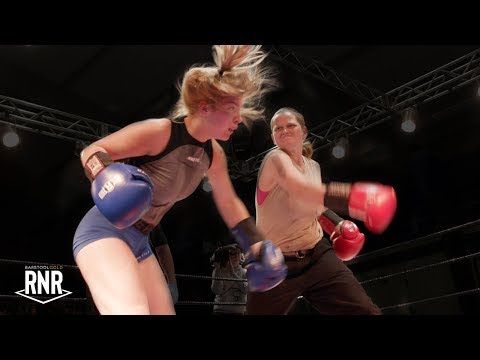 Saphyre says at the start of the film: “I’m a man trapped in a woman’s body.” That sounds about right. This ‘lady’ – we use the term as loosely as she does – is an absolute beast. What was Thorne thinking when she got into a ring with this monster. One of the commentators sums this one up pretty nicely:

“Never get in a fight with someone with nothing to lose. She literally has no teeth. She can’t lose them.”

Just because you’re a good wrestler doesn’t mean you’re a good boxer. College girl might be good at what she does but that really means nothing when she steps in against the deadly Saphyre.

This fight was only ever going to have one winner as Saphyre put a battering on poor Thorne from beginning to end. Every punch the hillbilly throws lands on the hapless younger woman, snapping her head back and marking up her face. She takes a hard blow to the nose, possibly breaking it. The referee intervenes at one point, giving her a standing eight count but credit to her because she continues.

And that’s clearly where Thorne’s wrestling experience comes in because despite taking a terrible beating from Saphyre, she never gives up. In the second round, she loses her hair tie and gets ruthlessly punched by Saphyre. Finally, in the third round, the referee intervenes to stop the fight. It was entertaining for as long as it lasted.

The fight took place at RNR 6. Rough N Ready is an amateur boxing promotion that prides itself on putting on cards with fighters who have no experience. The idea is that it is actually entertaining to watch fighters with no defence just raining blows on each other.

Whoever told Thorne that she was ready for this should be locked away for life. Clearly, they’re dangerous to be let near a boxing gym. They’re going to end up getting somebody hurt. Meanwhile, Saphyre has better hands than Ronda Rousey.

Gentleman Jeff - Feb 3, 2017 3
" All of a sudden I see this guy running out completely covered in blood and these guys were chasing him with sticks, trying...

Saenchai Has A Message For Conor McGregor After UFC 196