First He Survives One of the Most Ridiculous Knockdowns We’ve Ever Seen… Then He’s Leading His Press Conference Audience Singing ‘American Pie’… Tyson Fury Might Not Have Got the Official Win, But He Definitely Won the Hearts of Fans…

Is there a redemption story quite like this one? Tyson Fury went the distance with Deontay Wilder – only the second man to ever do so. In the eyes of the majority of commentators and fans, Fury deserved to win. Sure he was knocked down twice – the second one invoking one of the most incredible recoveries we’ve ever seen – but he surely did enough on points to get the win.

However, it was not to be and Fury would share a split decision with Wilder, who was made to look extremely one-dimensional for most of this fight. The WBC champion holds onto his belt for now, and still can’t believe that Fury managed to get up after being laid out flat like that.

‘The Gypsy King’ showed that he’s not letting the result get him down. He led a press conference audience singing ‘American Pie’ in glorious scenes that just show what a folk hero he is becoming. 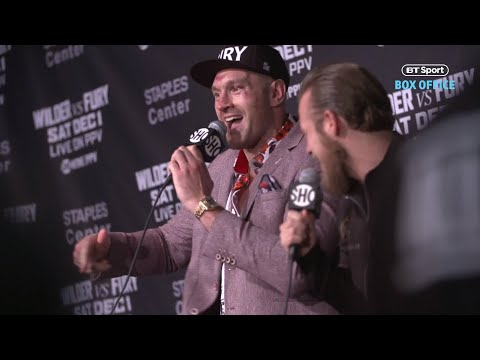 This was a very entertaining fight. Fury infuriated Wilder throughout, who struggled to find his range. Despite this, his patented right hand was on a hair trigger and everybody knew one second could change the complexion of this fight. Afterwards, Fury called out British champion Anthony Joshua. He said:

“There is another certain heavyweight out there… chicken, chicken! Where are you AJ? Where are you? We’ll do the rematch but we’re going to go away, recalculate, see what’s going to happen. We are two great champions. Never mind anybody else, me and this man here are the two greatest heavyweights on the planet.”

After this battle, few would argue against him.

Despite insisting that he had won the fight – well he’s going to – Wilder had nothing but respect for a man who has tested him like no other fighter has or will be able to do. No other active heavyweight has Fury’s unique style, which may be frustrating to watch but is incredibly effective. Wilder said:

“I was rushing my punches. That’s something I usually don’t do. I couldn’t let it go tonight. I was forcing my punches too much instead of sitting back being patient and waiting it. I really wanted to get him out of there give the fans what they want to see. I didn’t feel no pressure at all. When I rush my punches like that I’m never accurate. The rematch I guarantee I’m going to get him.”

It means a rematch is likely to go down in summer 2019, as we find out once and for all which of these two men is the better fighter. If Fury can stay focused and motivated, then the rest of the heavyweight division should quake in fear. Most people thought he took this fight too soon, but he looked excellent throughout.

Anthony Joshua will not want to face either of these men. Fury’s style would be an absolute nightmare for him, while ‘The Bronze Bomber’ is tough as nails and can put anyone to sleep. 2019 could be a massive year for the heavyweight division.