UFC Fight Night 127 goes down on Saturday Night in the O2 Arena in London, England. The card is being headlined by Fabricio Werdum who is fighting Alexander Volkov in a heavyweight showdown. Home favorite Jimi Manuwa takes on Jan Blachowicz in the co-main event.

The event has had a complicated build-up. Former middleweight champion Michael Bisping was expected to be involved. However, the Manchester native wasn’t able to agree on a deal with the UFC to fight Rashad Evans. Similarly, rising Liverpool star Darren Till wanted to take part, but couldn’t find an opponent. However, he will headline in Liverpool in May.

Werdum is hoping to continue building his momentum after beating Marcin Tybura in Sydney last November. The Brazilian made more headlines that night for a crazy boomerang incident involving Colby Covington. The divisive fighter brought smiles to faces of onlookers with a crazy ceremonial weigh-in against Volkov.

The former heavyweight champion, who incidentally lost to the current belt holder Stipe Miocic, proved he has a sense of humor. At the ceremonial weigh-ins, he charged up on stage, grabbing a chair, and then pretending to swing it at his Russian opponent.

Come on, it’s Werdum. Let’s not pretend we didn’t think for a moment that his crazy actions were for real. He proceeded to place the chair down in front of Volkov and then stand on it, looking down on the usually taller man. You’ve got to love him. Bruce Buffer definitely enjoyed it.

The actual weigh-ins went down smoothly on the day. All the fighters made weight. One fight was pulled from the card. Jack Marshman vs Brad Scott was scrapped after the former was advised by medical staff not to compete. It is believed that he was experiencing a bad weight-cut. Fingers crossed he recovers soon.

Elsewhere Jimi Manuwa will be hoping to get back to winning ways against Blachowicz. The Londoner hasn’t fought since July 2017, when he was knocked out by Volkan Oezdemir in the first round. That was poor timing for the Brit because he’d spent a lot of time calling out Daniel Cormier and bizarrely Anthony Joshua. 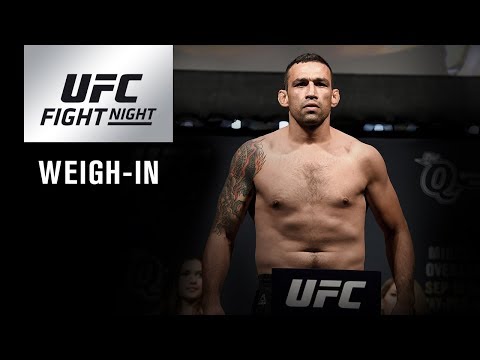 The full results of both the main and preliminary cards can be seen below. It’s definitely going to be an interesting night in London! With the UFC returning to the UK in May, it could turn into a big year for British MMA.

ross - Feb 17, 2019 0
In MMA there are plenty of examples of people who can fight hard and party hard too, but then there are those who take...