The younger of the Paul brothers had a much happier introduction to professional boxing with a win on his debut. Jake Paul fought fellow Youtuber AnEnsonGib in the co-main event of DAZN’s latest card. Love it or hate, it seems like they’re not giving up on these celebrity match-ups anytime soon.

Last year, his older brother Logan fought KSI in another ridiculous clash. That was entertaining in a way because of the novelty of it. However, boxing purists think that it’s an affront to the sport. Real fighters give their bodies and souls to compete, while these guys come in and think they can play at it.

In the end, the younger Paul got a dominant win over AnEnsonGib – what kind of a name is that anyway? We could research these two guys but we’re really not that interested in either of them. Anyway, check out the clips of these two wannabes ‘boxing’ below. 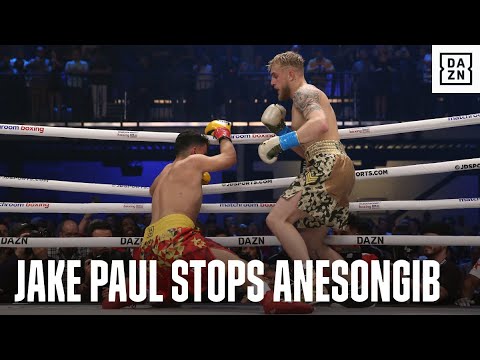 To sum up, AnEnsonGib should not have been in that ring. What was with his crouchy style and the way he was trying to punch? Clearly he didn’t have enough training coming into this one. Paul was in much better physical condition and was able to put some combinations together.

It’s actually very difficult to tell Paul’s level because his opponent was so bad. After stopping AnEnsonGib in the third round, he celebrated like he won every belt under the sun. In short, the hapless Youtube star made Michael ‘Venom’ Page’s opponents look like worldbeaters.

After the ‘fight,’ Bellator’s Aaron Chambers called out Paul for a fight. The former reality tv star has forged out a solid career in MMA. Dillon Danis has also called out Paul several times. They all know that there’s money to be made. Call us boomers but we don’t really get it.

Good night of boxing down in Miami and Jojo Diaz just took the IBF super featherweight title from Tevin Farmer with THAT cut for basically the entire fight. pic.twitter.com/kGyj1ivVaa

Incredibly, there were three title fights on the card. Two of them were below the Jake Paul fight, while Demetrious Andrade defeated Luke Keeler in the main event. He knocked the mandatory challenger out in round 11. However, he totally outclassed the Irishman who took a pummelling throughout.

Then he called out his fellow middleweight champion Billy Joe Saunders. The British boxer has been linked to a fight with Canelo Alvarez but was previously booked to fight Andrade in the past. It would make sense for this unification bout to go down. Of course, this is boxing so that’s exactly why it won’t happen.

Meanwhile, Tevin Farmer dropped his IBF super-featherweight title to Joseph ‘Jo Jo’ Diaz. Diaz suffered a brutal cut early on but his cutman did a superb job to keep him in the fight. He went on to eke out a decision over the champion. However, Farmer wasn’t the only man to lose his belt on the night.

Uzbek challenger Murodjon Akhmadaliev joined Leon Spinks as the second quickest unified champion. He achieved it in just seven fights by beating super-bantamweight champ Daniel Roman. It was a big night for boxing, even if you don’t like the Youtubers.