Chael Sonnen Believes That Conor McGregor May Have Retired to Avoid Tarnishing the UFC After Allegedly Being Investigated for a Sexual Assault in Dublin, Ireland…

There is nobody more famous in the MMA world than Conor McGregor. The former UFC featherweight and lightweight champion soared to global fame and became the first fighter to hold two belts at the same time in the promotion. In the beginning, he was the Everyman that the average Joe could get behind, and his support was famously passionate.

However, in the latter years of his career, as he has achieved more fame and become incredibly rich, he’s definitely gone off the rails. There have been nights spent in jail, multiple arrests and several lawsuits. We’ve seen him charge into MMA cages and shove referees, breaking a fan’s phone, and probably most famously throwing a dolly through a bus window.

The latest allegation, however, is the most troubling. He is allegedly being investigated for an alleged sexual assault that took place in Dublin in January 2019. Chael Sonnen believes that this is the reason why McGregor retired – to avoid tarnishing the UFC. 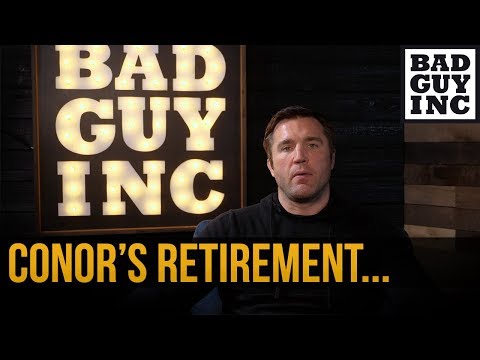 Make no mistake, these allegations are incredibly serious and potentially career-threatening. They have been rumbling on social media for the last couple of months. A law in Ireland prevents people from being named in the media until they are convicted of sexual assault, as it is an accusation that automatically tarnishes reputations, even if they turn out to be baseless. Sonnen explained how they could be bad for the UFC:

“It is best if headlines do not come out that say ‘UFC star Conor McGregor’ fill in the blank. How many times have we seen that? (Bellator CEO Scott) Coker’s had to go through that in the last 18 months. He had two knuckleheads that don’t even work for him anymore but used to, at some point, worked for him under contract, go and do something horrendous.

“Some old Bellator guy just robbed a bank. I couldn’t tell you his name, but I could tell you he’s a former Bellator fighter because that’s what the media says. What better way to describe Conor McGregor? Instead of just saying ‘Hey, Conor McGregor…’ No, they’re gonna attach it to a brand who did nothing wrong.”

Sonnen actually believes that McGregor might have done the UFC a favour by walking away if he was made aware that The New York Times was going to break the story. He said:

“Maybe Conor in the spirit of sportsmanship (went) ‘Hey, you guys did a lot for me, I’mma get the hell out of your way for a little bit while I deal with this’ or maybe somebody else came to him and said ‘Hey, separate yourself and do it now,” Sonnen said. “The shoe’s gonna drop, that’s your problem…’ Something more along these lines.”

McGregor – and Dana White’s – words cannot be trusted. While this would potentially explain the suddenness of his ‘retirement,’ many UFC fighters, including Donald Cerrone, believe that he’s just trying to enhance his bargaining power again and will be back.

If that is true, no doubt we will find out soon, as a potential fight in July was mooted. However, if not, the spectre of sexual assault allegations will hang over his shoulder. With the UFC having hired many fighters accused of domestic abuse in the past, including Greg Hardy, Anthony Johnson and Travis Browne, having their biggest star accused of something even worse is not good.

Salvador Sanchez - Jul 9, 2016 0
UFC welterweight Nate Diaz has finally been thrust in to the MMA limelight this year. After a career defining UFC 196 submission win over...

Who should TJ Dillashaw fight for his return?