The story has been in the faces of fight fans over the last couple of weeks. Dana White has done his best to draw attention to it. Floyd Mayweather coming out of retirement – again – but this time in the octagon instead of the boxing ring. Speculation continues to grow, with few trusting White’s word or Mayweather’s love of dollar bills.

At this rate White is turning into the UFC opponent that Floyd Mayweather is most likely to face in the octagon. “Money” is not at all happy with the UFC’s most high-profile official. He has even gone as far as accusing him of attempting to use his name as a draw during the UFC’s TV deal negotiations.

The UFC’s exclusive negotiating deal with Fox has expired. This means that they are free to talk to other media providers and platforms. Amazon is one alternative company that they are believed to be negotiating with, but you can bet there are many others. It would be a pretty clever of Dana White to use Mayweather’s name to enhance the profile of the UFC even further.

Let’s be realistic. There is about as much chance of Rocky Balboa fighting for the UFC as there is Floyd Mayweather. “Money” turns 41 in February. They say you can’t teach an old dog new tricks, but in the case of a professional fighter this is all too true.

He remains a genuine world class athlete, and arguably the greatest boxer who ever lived. But there’s too much to deal with in MMA that he would have to learn, for it to happen in 2018. He’s not getting any younger.

Floyd’s theory might just be right. In an interview with FightHype.com he totally put to bed any chance of him wearing 4oz fingerless gloves. He said:

“Their deal with Fox is coming to an end. So they’re trying to renew a new deal with any company. What better name could they use than Floyd Mayweather? Because that’s a great name to use.” 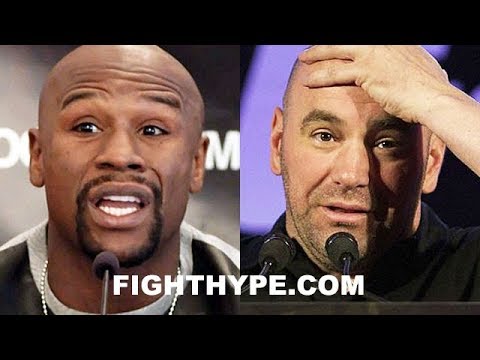 In fairness to Mayweather he gets it. He isn’t angry at how brazen the UFC is, because he’s a businessman and a promoter himself. It also shows how the UFC is suffering from a lack of star talent at the moment. Realistically if they had a billion dollars to drop on a single fight, Conor McGregor would have been back in action by now.

No, it’s not the business end that’s annoying him. Basically it looks like he is just sick of seeing his face in the media for completely ridiculous reasons. Unless Mayweather Promotions are the ones responsible, “Money” doesn’t want his name being used by others outside of his control.

Don’t Talk About My Money

Sorry Floyd, maybe you should have thought of that when you came up your nickname. It will be interesting to see if the rumours die soon. Knowing Dana White, he’ll be telling reporters tomorrow that they’re continuing negotiations. The circus never ends.

Dana White Has Update on Floyd Mayweather’s UFC Debut and it...

Darren - Apr 3, 2018 0
UFC President Dana White Warns Fans that it Will Take 'Years' for Floyd Mayweather to get Fighting Fit... With all the news yesterday about Tony...