Wow…women’s featherweight champion Cris Cyborg went to work on Holly Holm last night. Putting to bed all the talk of Holm being the GOAT with a win, Cyborg left ‘The Preacher’s Daughter’ looking like she’d been hit by a bus…

Taking place in Las Vegas, Nevada last night was the last UFC event of the year. UFC 219 featured a host of current and former champions, as well as some hot prospects and undefeated contenders.

Featured in the top spot was a women’s featherweight clash. Defending champion Cris Cyborg was pitted against former bantamweight champion Holly Holm. After snapping her losing streak, Holm was receiving her second chance at the 145-pound title.

UFC president Dana White claimed Holm would be the greatest female fighter of all time if she beat Cyborg. Winning against Cyborg is far easier said than done. After UFC 219, that accolade will arguably sit with her Brazilian opponent.

Cyborg was simply too big, too strong, too fast and too durable for Holm. Although she put up a gritty five-round effort, it was nowhere near enough for ‘The Preacher’s Daughter’ to secure the win.

Cyborg remained the women’s featherweight queen with a dominant decision win. In the process, she left Holm so swollen she was nearly unrecognizable.

Watch the highlights on the Youtube player below, with the post-fight announcement showing Holm’s messed up face further down:

As Tyron Woodley rightly states, Cyborg had a much wider array of attacks and defenses. Holm, much like Rousey did in their UFC 193 match, was simply going to the well with a limited arsenal of strikes.

In the end, Cyborg made her pay by essentially bludgeoning Holm for 25 minutes. The result, as you’ll see below, was a battered and swollen Holm, far different than how she entered the Octagon in Vegas: 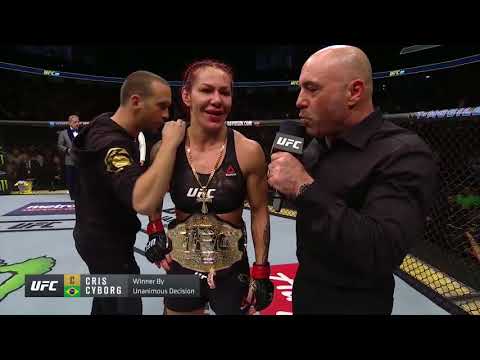 There you have it, the Brazilian terminator remains the top featherweight with a very convincing performance. Can anyone topple the cybernetic organism from the top of the female food chain?

John - Apr 28, 2021 0
Big Media personnel is running out of ideas after Usman's dominant win over Jorge Masvidal. Although it is possible that Usman can become a...