UFC lightweight Eddie Alvarez is gunning hard for a fight against Nate Diaz. The bad boy from the 209 has been absent for some time now, but finally confirmed he is returning this Summer…

Nate Diaz has long been a dangerous lightweight in the UFC, but only in 2016 did he really come of age. During a duo of thrilling bouts with Conor McGregor, Diaz made his name and became globally recognized.

Meanwhile, at the top of the lightweight division, Eddie Alvarez had just ascended to the throne with a rousing finish of Rafael dos Anjos. Sensing the opportunity, the UFC placed then-featherweight champ McGregor into a lightweight title fight after he’d just fought twice at 170 pounds.

Sound logic as usual by the promotion, logic which eventually worked out massively in their favor. ‘The Notorious’ schooled Alvarez, knocking him out with ease and capturing the lightweight title.

Now it seems the two men who fought McGregor in 2016 are on a path to fight each other.

Speaking with Ariel Helwani during the latest edition of The MMA Hour, Alvarez sounded off on Diaz. He’s been calling out his fellow lightweight since Diaz announced his return last week.

As well as stating the UFC has contacted him about the fight, Alvarez claims Diaz has already refused. The former lightweight champ also says Diaz backed down from a backstage confrontation and was saved by UFC officials. 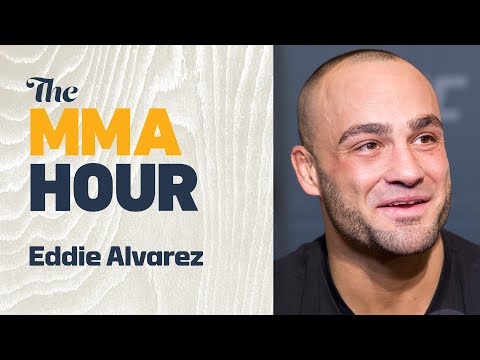 “The more I think about it, the more I’m like: When Conor takes a break, Nate takes a break,” Alvarez continued. “Conor’s like, ‘I ain’t fighting until August,’ and Nate’s like, ‘Well, I ain’t fighting until July,’ or some sh*t. I guess his ego doesn’t let him say, ‘I just want to fight Conor.’ Just say it. Like, just be honest with everyone. If that’s who you want to fight, there’s nothing wrong with that. But don’t call everyone out if you don’t have any intention of fighting anybody.

“You’re getting a bunch of fans excited who you’re just bullsh*tting. If you don’t want any work from any lightweight in the division, then just don’t say anything to any of the lightweights in the division and everything will be cool. But when you say things like that, you should be ready to at least fight somebody.”

“He looked down at the ground. I’m like, this guy is supposed to be so f*cking hardcore, so gangster? He wouldn’t even look me in the face when I was confronting him about all of the mean mugs and all of that sh*t. He looks at the ground and then the UFC officials kinda jump in middle of me and him, and then squash the whole thing.

BREAKING: Tony Ferguson on Standby For Conor vs Khabib Fight