Floyd Mayweather’s rumored UFC debut has everyone talking right now. The undefeated boxing champ was fast as lightning during his career, which only ended after he beat Conor McGregor in August last year…

Having already faced one of the UFC’s best, albeit in the boxing ring in August 2017, Mayweather seems confident about his chances in MMA. Unlike the transition from MMA to boxing, the opposite is fraught with far more hazards.

Albeit for MMA, McGregor has trained boxing, whereas grappling and striking with anything but the fist is unknown territory for his American foe. Should there be a rematch in the UFC octagon, few would confidently place any coin on the boxer.

But that’s not how Mayweather himself sees it.

Floyd Points Out Advantages in MMA

During a recent interview with Fight Hype, Mayweather discussed the topic of joining the UFC. Rather than point out the many aspects which would play against him, ‘Money’ singles out perhaps the only two things in his favor: 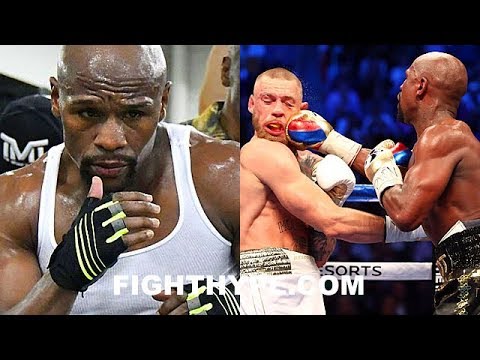 “I can’t say right now. I can’t really say how things are going to play out. I’m a numbers man. I’m all about the numbers.”

How fast can one truly be, even at the caliber of Mayweather, when you are getting the piss choked out of you on the canvas?

“They say he talk a lot of trash and people praise him for it, but when I did it, they say I’m cocky and arrogant. So biased! Like I said before, all I’m saying is this, I ain’t racist at all, but I’m telling you racism still exists.”

WATCH: This Crowd Brawl at BareKnuckle FC 5 was BRUTAL

Canelo Alvarez is “Open for Business” With Jorge Masvidal