From Sand-digging to becoming the UFC heavyweight champion, Francis Ngannou has one of the best stories to tell. He came from a poor family where he needed to work in order to survive. Ngannou started MMA late and had no background with other martial arts, which makes being a champion even more impressive.

Ngannou started boxing at 22 which is late for someone who would want to compete for a living, he later decided to move to France for bigger opportunities. Ngannou had no money when he arrived in France until he met Fernando Lopez. Ngannou initially pursued boxing but Lopez saw that he could be better competing at MMA instead.

In his MMA debut, he faced Rachid Benzina and via armbar. It is weird to imagine Ngannou, a guy his size to execute an armbar considering it his first fight. Less than a month later, he fought again but lost via decision.

4 more wins and Ngannou was set to make his UFC debut. A scary heavyweight that could put anyone’s light out. In his first fight, he fought Luis Henrique and won via vicious knockout in the first round. 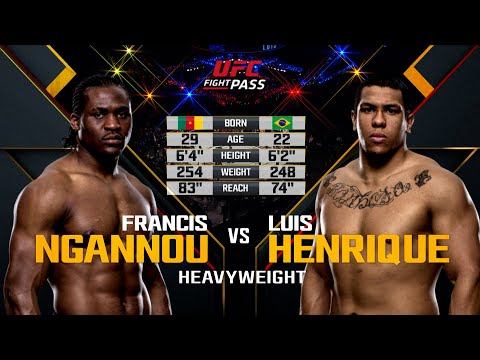 Obviously, the fastest way to climb the rankings in MMA is to get an impressive finish, Ngannou has no problem in that department.

His next fight was against Curtis Blaydes, he was also going in as the underdog. Blaydes was a rising prospect because of his high-level wrestling, many thought that Blaydes would just take him down and win via decision or a late finish but that was not the case. Blaydes absorbed a lot of punishment, that closed his eye. The doctor was forced to stop the fight.

His third fight, Bojan Mihajlovic and won via TKO in the first round. One of the unique finishes that showcased how strong Ngannou was his Kimura finish against Anthony Hamilton. He just learned the kimura the night of the fight and the way he torqued his body was like a first-timer but he still managed to make his opponent tap, which just shows how naturally strong he is.

He then faced former UFC heavyweight champion, Andrei Arlovski. He was already making waves in the division, but when he faced Arlovski it just showed how scary his punches are. Ngannou landed an uppercut that literally put Arlovski up in the air.

UFC then booked him for his first PPV event against Alistair Overeem. He and Alistair Overeem were scheduled as the co-main event. Overeem was just coming off a title loss against Miocic, so a win for Ngannou will likely lead him to a title shot.

Ngannou landed one of the most brutal knockouts in UFC history, as he put Overeem to sleep with a perfect uppercut. That win not only gave him a title shot, but the UFC marketed him as the next heavyweight champion. There was so much hype for Ngannou’s title fight.

Unfortunately for Ngannou, Miocic had the perfect game plan and executed it very well. Miocic started off being cautious and used his wrestling to take Ngannou down. Although Ngannou landed heavy shots in the first round, it couldn’t put away a durable Miocic. Once it went to the later rounds, Miocic was able to dominate a tired Ngannou.

After the fight, Ngannou said that he might have underestimated Miocic and with his past wins, it was hard not to feel invincible.

Ngannou was looking to bounce back and fight Derrick Lewis at UFC 226 which was also headlined by Miocic vs Cormier. At the fight, Ngannou was gun shy and hesitant, it may have been due to the Miocic loss that he lost his confidence.

Dana White was trashing Ngannou saying that ego led to Ngannou’s downfall. It was time for Ngannou to begin his redemption arc, but the UFC booked him against Curtis Blaydes.

Even though Ngannou had a win over Blaydes, he was still the underdog since Blaydes had a 5 fight win streak. It did not pose any problem for Ngannou as he still manage to knock down Blaydes and land vicious punches. Blaydes protested with the stoppage but he absorbed many unanswered shots.

The confidence was back again, Ngannou faced former champion, Cain Velasquez. Ngannou was still the underdog going to the fight. The fight ended pretty quickly, as Ngannou landed an uppercut that knocked Velasquez down. It is also worth noting that some speculate that Velasquez suffered a knee injury that led to him falling down.

In his next fight, he was set to face another former champion in Junior Dos Santos. It was a great test for Ngannou’s technical standpoint since JDS is known for his high-level boxing. The fight did not last long either as JDS lunged an overhand that miss badly and Ngannou was there to counter.

With three wins ending in the first round, there is without question that Ngannou deserved to fight for the title again but with the Cormier vs Miocic trilogy booked, Ngannou needed to either wait or stay active. He accepted Jairzinho Rozenstruik’s callout and clashed.

Again, Ngannou with a quick finish as he swarmed a barrage of punches, and only one punch needed to land. Once it landed, Rozenstruik was put to sleep.

With Miocic winning the trilogy against Cormier, the stage is set for a rematch between Miocic and Ngannou. It was hard to gauge whether Ngannou improved since their first fight because his fights just end so fast.

At the fight, it was a different Ngannou. He was more composed, technical, and knew how to defend the takedowns. Ngannou landed bombs but it was at the second round that he was able to finish Miocic.

It was not sheer luck that Ngannou got a KO win but rather he showed huge improvements not only in his striking but also his wrestling. He is expected to defend his belt against Ciryl Gane next.

Darren - Jun 18, 2020 0
Ali Abdelaziz is one of the most powerful men in MMA. Before Henry Cejudo retired, he represented three champions, with Kamaru Usman and Khabib...

Importance of Sports in Student Life