Khabib Nurmagamedov has had an incredible year. He’s just defended his lightweight title for the second time, beating Dustin Poirier in Abu Dhabi. ‘The Eagle’ can definitely consider himself one of the best 155lbers of all time – if not the greatest.

The way he manhandles people is ridiculous. They just don’t know how to deal with his pressure and his top game. He gets them down against the fence and brutalizes until an opportunity for a submission arises. If it doesn’t come, he just keeps battering them.

However, a ghost from his past could be coming back to haunt him. PETA are on his case after video footage of him with a bear in Russia went viral. You know you’ve made it when they’re coming after you.

At Scrapdigest are totally against cruelty to animals. However, we also think PETA are a pack of annoying fools. The organisation targeted the lightweight champion after video footage emerged of him meeting a bear in Russia. Did the footage look great? No, of course, it didn’t. Nobody is going to take PETA seriously though. They’re just trying to get publicity.

”PETA encourages the UFC to evaluate its relationship with Mr Nurmagomedov until he shows a clear change in attitude and a commitment to showing animals the respect that they deserve,” a PETA spokesperson told Business Insider. “Wrestling with a chained bear is loathsome behaviour that shows an utter lack of respect for and consideration of who these animals are.” 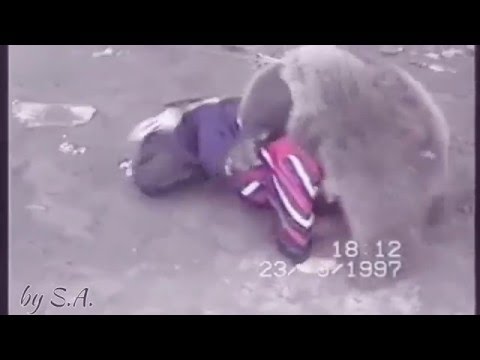 Despite his nickname being ‘The Eagle,’ many people associate Khabib with bears. This is mostly because of a 1997 video that showed the young Dagestani wrestling and playing with a bear cub. That’s how they roll in the self-governing region of Russia.

It’s no wonder that he’s a UFC champion. How could he not be, if his training partner as a young child was literally a bear?

The Russian fighter is now searching for his next opponent. We all know that it should be Tony Ferguson, but this is combat sports and things are never that smooth at the top of the game. His fatherAbdulmanap has said that Khabib should retire after getting to 30-0. Only time will tell if he does.

Ferguson is the most deserving opponent. Incredibly, the pair have been booked to fight four times, with both men pulling out twice each. A former interim champion, Ferguson was harshly stripped after getting injured on media duty. ‘El Cucuy’ has come back and won twice since then.

The other big name on everyone’s lips is Georges St. Pierre. He might be retired but that doesn’t stop people talking about him. Even Khabib’s manager has said that this is the fight to make. It would definitely be the most lucrative, but the purists will surely want him to take on Ferguson.

Ronaldo to McGregor: “You Don’t Have a Jet?”