Having been bitter rivals for many years now, the UFC 214 main event between Daniel Cormier and Jon Jones couldn’t come soon enough. Their feud dates back to the Strikeforce days, when a chance encounter in a parking lot lead to a verbal dispute.

Years later at UFC 182, ‘Bones’ would hand ‘DC’ his first professional loss. Since that January 2015 clash, Jones has been stripped of the undisputed and then interim title following a scandalous sequence of events.

Numerous failed drug tests, a hit-and-run in New Mexico and time in a county jail cell have seen Jones fight once in more than two years. Jones is now back (hopefully), and so is the brutal rivalry with Cormier…

The Latest Round of Trash Talking

Appearing on UFC on FOX this week, Cormier and Jones shared a tense interview. Looking very similar to their infamous ‘hot mics’ interview before UFC 182, they traded barbs for a memorable seven minutes. There’s also the video of their best moments from the official press conference further down.

Watch as they throw insults back-and-forth as Michael Bisping and Kenny Florian look on in amusement: 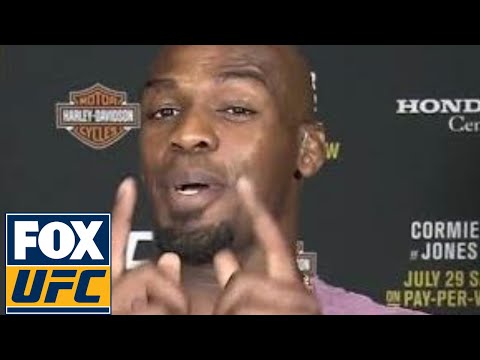 “They gave you the max suspension they could have given you! Brock Lesnar got one year too. (Jones argues Brock got two years suspension). No Jon, they gave him a one year suspension. We both want to beat each other just as bad.”

“Well, you’ve earned the title fight, you know, so I imagine you’re about 3-0 in the UFC, so those first three fights. Ovince Saint Preux, Gusmao, and Forrest Bonnar – what’s that guy’s name that he beat? Yeah, Stephan Bonnar. Stephen Bonnar those three fights is when you didn’t do steroids, but everything else in the middle is eliminated.”

“(Anderson Silva) told me this guy is scared. He said Daniel didn’t want to strike with him, and he’s an old man! He also gave me some pointers on what strikes might land.”

“When I started powerlifting four days a week, with these chicken-ass legs , with these bad genetics, and I started deadlifting 600 pounds, squatting 500 pounds, USADA was in full effect. So how did I get away with that?”

Atilano Diaz - Jan 24, 2017 0
A week after UFC welterweight champion Tyron Woodley accused the UFC of racism, and people are still talking about such a sensitive topic. Do...