UFC has gotten a taste for booking boxers vs. MMA fighters…

Back in March, David Haye told reporters that the UFC contacted him about competing against an MMA fighter. Despite Haye’s initial enthusiasm however, months passed without further news on the subject. That changed earlier this week, when more details regarding the UFC’s negotiations with Haye were revealed.

Unfortunately, fans will have to wait until 2018 before seeing the popular British boxer up against someone from UFC’s roster.  The 36 year-old is recovering from surgery to repair a torn achilles tendon. He suffered the injury in his last bout on March 4th against Tony Bellew. Haye tore his achilles in the 6th round but continue fighting until the 11th, when his corner finally stopped the fight.

On March 18th of this year, Jimi Manuwa knocked out Corey Anderson inside London’s O2 arena. After the bout, Manuwa surprised many when he neglected to call out anyone from UFC’s roster, and instead challenged Haye. 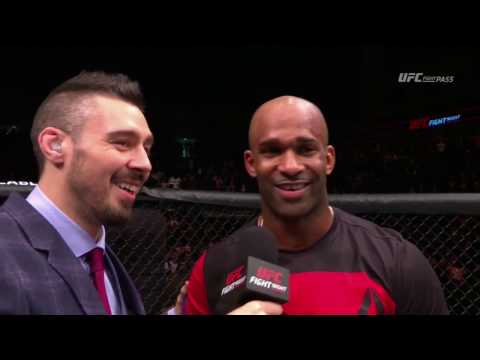 “The answer is a resounding yes!” Haye told fans. “I was very impressed with his quick knock out the other night at the O2 Arena. If any of the mixed martial artists can convert over to be a successful boxer he has definitely got the body shape and style to do so.”

At the time, few thought there was much chance of the bout being organized. Not long after however, Haye told fans and media that negotiations had begun.

“Yeah we have heard from Manuwa’s management and UFC so it is something that we are looking at at the moment.

“Obviously it is a little way off being confirmed. But it is a fight that would unify a lot of the fans from both UFC and boxing and make a mega event.”

Jimi Manuwa (#3LHW) takes on Volkan Oezdemir (#5LHW) at UFC 214 on July 29th. The winner of the bout is likely the next in line for a light heavyweight title shot, although that depends on what happens between Jones vs. Cormier on the same card.

Despite being so close to a championship title fight, Manuwa confirmed to reporters earlier this week that negotiations are ongoing for a 2018 bout against Haye.

“100%,” Manuwa said in this interview. “We’ve talked a lot. Me and Dana [White] and him have talked a lot. 100%. We had a conference call when I was in Vegas. Regardless, he’s not going to be ready to fight until November, so it’s looking like the fights going to happen in January or early next year.”

EXCLUSIVE: Manuwa reveals Haye fight IS ON for next year! pic.twitter.com/7wutLoTzkx

“Title shot first,” Manuwa continued. “First thing’s first, we get this [Oezdemir] fight out of the way, and then we’ll go from there, depending on how the title shot thing goes. It’s either going to be the David Haye fight or the title shot. Ideally, it’d be the title shot and then David Haye.”

It’s notable that Haye mentioned the UFC approached him about a boxing bout and not an MMA fight. This was back in March, which shows the idea has been swirling around Dana White’s head for the at least this calendar year.

Now owned by talent agency WME-IMG, the UFC is in the star-creation business. If they produce a fighter who draws on PPV, they might not particularly care if they are a boxer or an MMA fighter. We’ll probably learn more about UFC’s intention to promote further boxing events by the time the year is out.

Salvador Sanchez - Sep 1, 2017 0
One of the most feared heavyweight boxers of all time chimes in on Conor McGregor's boxing skills...again UFC lightweight champion Conor McGregor made a great...

Conor McGregor Looked Huge At The Weigh-In, But Did He Flinch?

Watch: Canelo vs. Cotto Full Fight Video & The War Being...