If done right, no can defend…

Over the years we’ve seen our fair share of crazies in the mixed martial arts world. During the Japanese golden years, fighters like Charles ‘Krazy Horse’ Bennett & James Thompson entertained fans with their outlandish personalities.

Although many fighters couldn’t pair the crazy charisma and antics with any real accomplishments in the sport, they were still wildly entertaining. Perhaps only Conor McGregor, so far, has managed to keep up the trash talk-victory ratio.

During a brief scan of the web we came across this larger-than-life character, and we think you’re going to love him. His name is Jonathan Ivey, and he is about as nuts as they come. Ivey has 89 fights, and currently competes as a heavyweight.

Why is Ivey known for being such a crazy cat? During his many fights as a professional, this tattooed lunatic has gone viral on many occasions.

First, let’s look at his Pancrase bout with Hikaru Sato, skip to 2:27 in the following video and enjoy:

During the uber-twilight of Ken Shamrock’s career, he also faced Jonathan Ivey in the cage. Although Ivey lost by decision in their 2010 clash, he still managed to rack up the Youtube views with this insane moment: 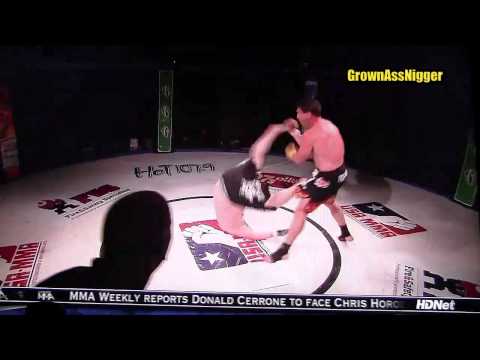 It may look as though Ivey is a bit out of his depth, but this guy has some skills. During his career, Ivey has won 32 fights but only one of them have gone to the judges decision. That’s an insane ratio by anyone’s standards.

Rushing his opponents from the opening bell, Ivey has a unique stance and style. As a heavyweight Ivey has natural power, but he also possesses very awkward striking angles. Just so we’re not totally bashing the guy, here’s an excellent Jonathan Ivey highlight we found on Youtube! 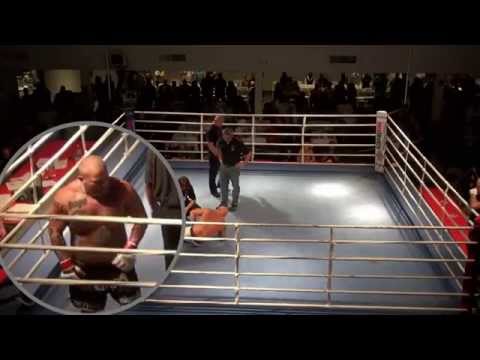 “Oh, man – when I dropped my version of The Rock’s ‘People’s Elbow’ on heavyweight fighter Joe Nameth in New Orleans, it didn’t even occur to me that the moment would live on forever,” mused Johnathan Ivey from his Tennessee MMA training camp.  “It was just something silly I did to entertain the crowd.  But that clip has been circulating all over the World Wide Web, landing on YouTube and countless other websites.  In fact, someone once told me that my impromptu elbow drop has been viewed by over half-a-million MMA fans on six different continents, including Asia, Australia, Africa and Europe – and I’ve received interview requests from journalists all over the globe.  Isn’t that crazy?”

“In my last fight – against Ricco Rodriguez in Houston, Texas – I believe I became the first fighter in MMA history to successfully land the ‘Karate Kid’ crane-kick in a live bout,” said Ivey.  “That’ll probably be popping up on the Internet before too long as well.  It sure as hell took my opponent by surprise, I guarantee you that!  Mr. Miyagi would’ve been proud of me.  Wax on, wax off, baby!”

“I’m a single Dad with 100% full custody of my little girl – and she’s my entire reason for living,” Ivey whispered, his tone instantly transformed from playful to solemn.  “She’s with me 24-hours-a-day, 365 days a year.  Me and her are tag-team partners for life… and we wouldn’t want it any other way.  See, I know some people think that standing inside an MMA cage and trading bombs with a heavyweight warrior is scary stuff.  But that ain’t nothin’.  What’s truly scary is contemplating a future where Savannah is trapped in poverty, stuck in a minimum wage hell for the rest of her life.  These kinds of thoughts chill my soul… and at least once a week, I wake up in the dead of night, imagining a world that robs her of her happiness and childhood innocence.  As God is my witness, I will never – ever – let that happen.  You just don’t understand the rage a single father feels when he knows that the only thing standing in the way of a better life for his baby girl is that opponent standing before him.  It makes you want to just smash his skull in.”

Darren - Oct 30, 2019 0
Conor McGregor is finally coming back and it looks like Donald Cerrone is first in line to fight him. The Irishman confirmed last week...