It’s been a wild year for Nick Diaz. While the Stockton native hasn’t fought inside the octagon, he’s been in literal physical battles on the street, and an ugly, well-documented domestic abuse battle that threatened his career.

He came through the latter unscathed and looks set to resume his fighting career at some point in the near future. Diaz hasn’t fought in the octagon since 2015 when he took on Anderson Silva. Initially a defeat for the Californian, that fight was overturned to a no-contest after Silva tested positive for PEDs, and Diaz for marijuana.

Diaz addressed his fans in a live stream last night and discussed what happened to his elbow a couple of months ago. In case you haven’t seen the nasty injury he suffered, there are images below. According to Diaz, it happened when he got jumped during a street fight. Oh and he’s smoking a joint. Watch the footage below. 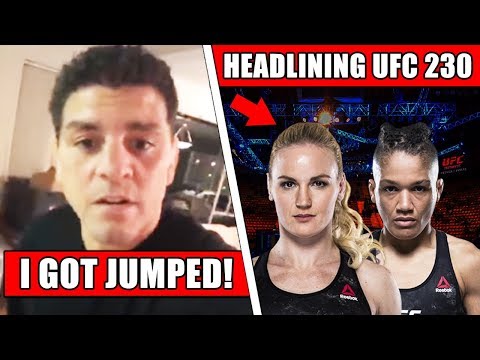 The elder Diaz brother alleges that he was jumped one night by two men, sparking a furious brawl. He was forced to react and defend himself. The fight moved down the street as he took on the thugs and battled furiously. Diaz explained:

“I fought more times than you last year and the year before that. I fought more than anyone on the f***ing roster last year. You see my elbow? How the f**k you think that that happened?”

“2 bums, big old black dude started jumping me. I fight both of them. These two bums backed me a quarter mile down the road. Well I’m kicking one in the leg, and falling and slipping and hit my elbow on the ground. Before I get arrested for some overly outlandish accusations…”

As you can see from the injury above, it’s really not very pleasant. It’s the same sort of mark that someone would get if they fell off a motorbike, and clearly, it got infected. Your arm is not meant to leak gunk like that. It could be a good way to win an MMA fight though. Just wave it at somebody and they’ll run away from you. Nobody wants to be messing with that.

Diaz was arrested for his alleged (since overturned) domestic assault. To make matters worse for the Californian, he was stuck in a precinct cell with the arm untreated. Not fun guys. Not fun at all.

The elder Diaz is expected to make his return towards the end of this year or in early 2019. It’s unknown who he will fight, but he’s already said he would beat both Conor McGregor and Khabib Nurmagamedov. He’s got a lot of money to make in a short amount of time so you can guarantee he’ll be wanting the biggest fights possible.

Both Nick and younger brother Nate have cult hero status in the UFC. Any event they are part of tends to do well, so the UFC will be delighted to have him back on board, as long as he doesn’t start calling for a 175 superfighter division.

Salvador Sanchez - Apr 30, 2017 0
Does Conor McGregor get favored treatment from the UFC? Since joining the UFC in 2013, Conor McGregor has rose through the ranks, and up the...

Daniel Dubois did QUIT inside the ring but there is nothing...