Michael Bisping has frequently complained about steroid users in MMA. While the current middleweight champion acknowledges GSP is not someone believed to use PEDs, he does believe GSP shares a certain characteristic with those who do: tiny balls.

UFC executives and fans alike have been anxiously awaiting a date for the next middleweight title bout, but it appears the parties involved are 2 months apart on a desired date.

Bisping’s recent testicle-related comments were made out of frustration with the continuing delays in scheduling the title fight between the two.

When Will GSP Face Bisping?

Michael Bisping and Dana White are both hoping the fight will main event the UFC 213 card on July 8th. GSP on the other hand has been pushing for the fight to take place in September since he announced his return to the company. While nothing is confirmed it is believed UFC’s September PPV, UFC 216, will be held in GSP’s home country of Canada.

Earlier this week Dana White stated he believes they will have a date for the fight within the next week.

“There’s some things we have to wait for. I’m assuming probably another week I should have a date.”

According to Bisping, GSP should not be allowed 5 minutes to recover if hit below the belt. Reporters caught up with him recently for clarification: 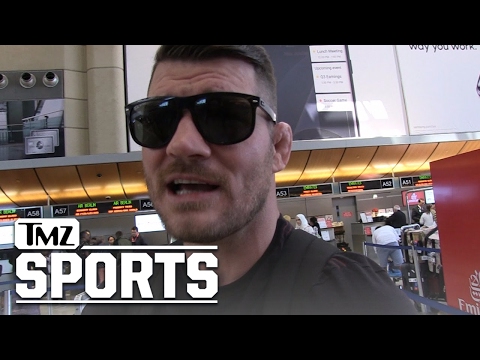 George St. Pierre wants the fight to be held in Canada, in part to help rejuvenate MMA in the country. All aspects of UFC’s business in the country has fallen since George stepped away from the sport. A GSP fight in Canada could help to counteract that trend.

GSP had previously attempted to negotiate a deal which would have allowed him to fight at UFC 206 in Toronto, but negotiations fell through. The event ended up being headlined by Anthony Pettis vs. Max Holloway for the interim featherweight championship.

Bisping has commented that if Georges can’t be ready in a few months that he’d be willing to face Yoel Romero next instead, although Romero was left unconvinced by this comment.

Darren - Jun 15, 2018 0
Derrick Lewis Gives Francis Ngannou a Run For His Money With Epic Power Punch... Sorry Francis Ngannou, you're no longer the most terrifying man in...

Is Ryan Garcia ready for Gervonta Davis or Devin Haney?

Andy Ruiz’s fight with Arreola is his road to REDEMPTION

Dana White Caught Watching Wilder vs Ortiz While at UFC 222

Security precautions in workplaces shouldn’t be anything less than perfect

UFC is looking to book Poirier vs McGregor 3

Georges St. Pierre Will Challenge Conor McGregor On One Condition