Jorge Masvidal won a whole load of new fans last weekend in London when he obliterated Darren Till with the cleanest two-punch combination you will ever see. He literally ended the Scouser, who was unconscious before he hit the floor in arguably the best knockout of the year – certainly the most vicious.

He’s basically entered Diaz Brothers territory. He talks like a gangster and says what he thinks. He then went 2-0 in England, when he smashed Leon Edwards – another welterweight contender – who was trash-talking him during an interview.

Masvidal was linked to a welterweight title fight against Kamaru Usman. Of course, with one win in his last three, it was unlikely that this was ever going to happen. But if you’re going to make an impact, there’s no better way than devastating somebody in front of their own crowd. And now he wants to do the same thing to Conor McGregor.

McGregor is the biggest star in MMA. If terms can be agreed with the UFC, he wants to return in July. A whole host of names have been linked to face the most lucrative opponent possible. Masvidal is the first to call for a fight in Dublin. After knocking Till out in front of a partisan English crowd, he wants to do the same in front of McGregor’s Irish fans. He tweeted:

“Summer time 3pc combo lets do it in Ireland @TheNotoriousMMA.”

That is a bold callout. You’ve got to give him props for giving it a go. If you don’t ask you won’t receive right? 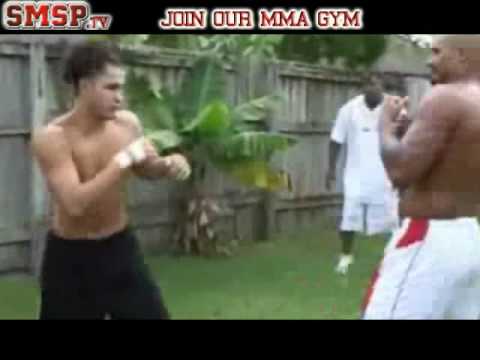 Masvidal is renowned for basically being a savage. His introduction to combat was as a streetfighter at a young age. There’s a great video of him fighting Kimbo Slice that went viral years ago. The Cuban-American strongly believes that he would take McGregor out on the feet. He said:

“I’d finish him with strikes. No one has done that to him right?”

That’s a bold call by Masvidal who is correct. McGregor’s Achilles heel has traditionally been his ground game. All of his losses have come via submission, including his two in the UFC  – to Nate Diaz and Khabib Nurmagamedov. Could he go toe-to-toe with the Irishman on the feet?

Jorge Masvidal throws down with Leon Edwards after knocking out Darren Till. #UFCLONDON pic.twitter.com/iZAksUqESJ

It remains to be seen who McGregor will take on next. Donald Cerrone was the frontrunner, but that fizzled out and now ‘Cowboy’ is set to fight Al Iaquinta instead. ‘The Notorious’ appears most enthusiastic about completing that trilogy with Nate Diaz, with the winner progressing to take on Khabib Nurmagamedov. The winner of Max Holloway v Dustin Poirier has also been mooted.

However, Masvidal is another intriguing option. His name probably isn’t big enough right now, but as a former lightweight, he would be capable of taking McGregor on at 155 – the Irishman’s preferred division. Right now it seems unlikely, but can you just imagine the trash that would be talked if this did go down?

Salvador Sanchez - Jan 4, 2016 0
Conor McGregor hopes to move his success from the UFC octagon to the big screen, and he'll do so with a host of well...

Fedor Emelianenko Finally Gets An Opponent For Rizin

The Seven Best Fighters Who Never Got Paid