In an interview with Gamebred, he said that he is now focused on his rematch with Kamaru Usman for the title. It is without a doubt, a big news for the UFC Welterweight division but some fans also think that Masvidal needed to a win to get another shot for the title.

Although the UFC has not announced officially yet, it seems Masvidal’s words are as close to confirming it. Jorge Masvidal watched the fight with Canelo vs Yildirim, an exclusive interview consisted of Masvidal giving props to Canelo and confirming his next fight. 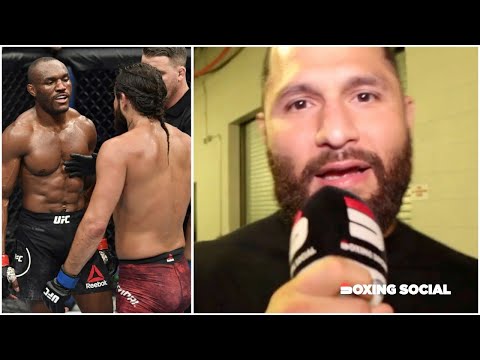 In their first fight, Usman dominated all five rounds which led to a unanimous decision. Masvidal said after the fight, if given a full camp, he knows he could beat Usman. He even said that he managed to break Usman’s nose but it was later revealed that Usman’s nose was broken before the fight even started.

Since their last fight, Masvidal has not fought any other opponent and Usman has defended his belt against Burns. It was Usman who called out Masvidal for the rematch saying that he will grant Masvidal another shot for the title and that there will be no more excuses on who the better fighter is.

Another factor that played in booking Masvidal, is because of their PPV success on UFC 251. Some reports indicate that it was either the highest or the second highest PPV of the year and it was a short notice main event. Masvidal is certainly a UFC star.

In terms of majority, most would have wanted to see Covington vs Masvidal instead. It was certainly the fight to make, given their history and bad blood. It is also the fight that people have not seen yet, meanwhile Usman has beaten all top 4 welterweight contenders.

Masvidal should also be prepared as Usman is training his foot stomps.

It is all fun and games and Usman embraced the meme as well. If it looks stupid but works, it ain’t stupid. Usman has improved his striking tremendously on his last fight, but his go to style is still to wrestle his opponents.