Now that he main part of the promoting is done, the stars of MayMac can focus on training. Even where that gym work is concerned, the rumours and reports continue to keep the attention on both men.

One particular story that emerged earlier this week had the internet ablaze with debate.

Pro boxer Jesse Vargas blew the lid on a wild story about McGregor being KO’d by a boxer in the gym. Hinting it was Brandon Rios, Vargas’ comments sparked a viral response online.

With McGregor’s camp yet to respond, Mayweather has released a statement to FightHype.com, and he isn’t buying the story:

“I Can’t believe it. Jesse Vargas and I are in communications, I’d like to work with Jesse as far as Mayweather promotions is concerned. Everything is rumors until I see it,” Mayweather said about McGregor getting knocked out. “I have to physically see it with my own eyes.” 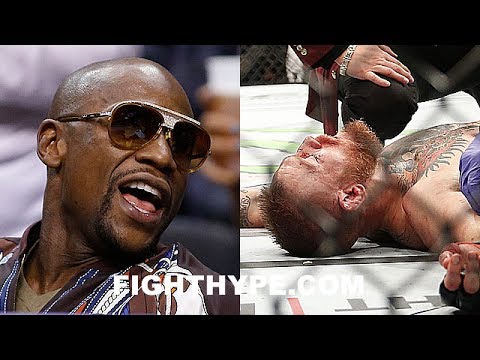 Conor is a superb fighter and has done so well, but I would have to be in Mayweather’s favour. He’s the best boxer in the world so Conor has to have a good game plan, but on the other hand it’s boxing and anything can happen.

Conor will certainly be super fit for this fight. His footwork and flexibility are excellent, which we have seen in the octagon. He has every chance of beating Mayweather if he catches him… I don’t think he’ll outfox him. Although he’s a younger and fresher man, boxing is a different sport altogether,” he said.

It’s a tale of two fights, really. On the one hand, you’ve got arguably the greatest technical boxer of our time, and he’s undefeated at 49-0. Some fans are willing to bet the mortgage on ‘Money,’ as they feel this will be a landslide.

Then we have ‘The Notorious,’ a freakishly gifted athlete who has dominated opposition in the UFC and won two titles there. But he has zero professional boxing experience, and he’s debuting against Floyd Mayweather.

Yes, that marginal chance will likely not impact on the pay-per-view buys, but that has nothing to do with us fans. The reality could well be that this fight turns out to be a sh*tter.

Darren - May 22, 2018 0
UFC Fan-Favorite Nick Diaz Has Been Out of Action Since 2015. Has Paul Daley Accidentally Told Everyone Why? Nick Diaz is one of the most...