Maybe the fans can fight Conor’s battles for him…

One message Floyd made boisterously clear on the Mayweather McGregor World Tour, was that the fans can’t fight for Conor. What he was communicating was that even though the fans might be on Conor’s side, that won’t determine how the bout goes.

This may be true, but Conor’s fans absolutely can prevent Floyd from getting back to training, especially if they swarm his car and prevent him from driving away.

As it just so happens, that is exactly what a group of Conor fans did recently.

What Did We Learn From the Mayweather McGregor World Tour?

While the recent 4-day “world” tour was an entertaining spectacle, it also confirmed that what happens on August 26th has little to do with sport. The super-fight of the summer pits two superstars, both of whom transcend their own sports, in an athletic contest which will transcend all of sport.

The pop and circumstance around the press conferences left more than a few fans feeling as though this giant hullabaloo is actually a little silly however.

A 40 year old man shouting “Voltron! Power Rangers!”. A 28 year old man wearing what he claimed was a polar bear coat (incredibly unlikely it was actually fur from an endangered animal.). Even WWE doesn’t dare go these overly-dramatical lengths. WWE doesn’t ever stand to make as much money from one bout as Conor and Floyd do from theirs though.

Considering the ridiculousness surrounding this bout, it’s not surprising that heavily invested fans have begun behaving much like Conor does. Part of Conor’s superstardom is due to his unwavering confidence in himself. No matter the obstacle, Conor truly believes he can overcome it. That attitude is infectious, and many of Conor’s fans have come down with a case of it.

Conor fans were so revved up after the last stop on the tour that when they spotted Floyd in a Rolls Royce trying to leave the area, they wouldn’t let him. They pulled their own version of “Voltron” and swarmed Floyd’s Rolls Royce. The situation ended up causing a giant headache for Floyd’s juiced up security staff and other near-do-wells that Floyd keeps on payroll.

Check out this video of the incident: 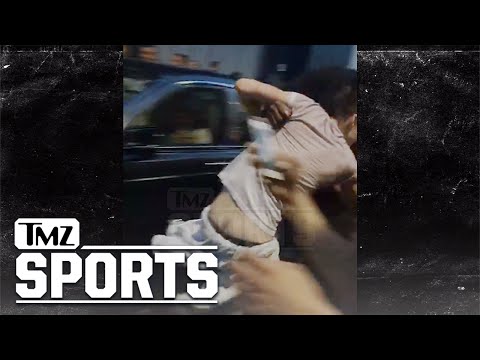 If this is how they react to a press conference, what’s going to happen during the actual bout? 12 rounds of Floyd outboxing Conor might be too much for such a rowdy fanbase to take.

It’s likely the most exciting part of this bout has already happened; the press conferences. This is especially true if the fight goes as many are predicting it will.

While Floyd outboxing an under-matched Conor is the most likely conclusion to this story, it isn’t necessarily what will happen.

Anything can happen in a fight, and that includes Floyd tearing an ACL mid-bout. Floyd is now 40 years old, there is no telling how is body will react.

Come August 26th, no matter what happens, boxing and MMA could change forever.

Fedor Emelianenko’s Brother is Out of Prison & He Looks TERRIFYING