Um…What the fook is going on here?

UFC lightweight champion Conor McGregor continues to take the combat sports world by storm. Regardless of how ill-fated his boxing match with Floyd Mayweather might be, everyone is talking about it.

None more so than McGregor himself, as the Irishman has been talking up a mean game. During the four-day world tour last week, ‘The Notorious’ lived up to his nickname, and the results were manic.

Plenty of trash talk back-and-forth, but some of the most memorable moments came when McGregor trashed Mayweather’s bodyguards and Showtime exec Stephen Espinoza.

A few of McGregor’s best quotes before we get to the meat on the bone:

What the fook was that yesterday?

(Mayweather) shouts Voltron! Power rangers! And these fooking juice heads come walking up standing before me. May, 40 years of age, get your shit together, my god…Juice head monkey, juice head monkey”

“And in six weeks, I run boxing! (laughs hysterically) How the f*ck did they let me roll up in here? They got greedy that’s f*cking how. What’s up Espinoza? You little f*cking weasel. If there’s ever a man who looks like a weasel, that’s f*cking it. What you gonna do? You gonna stand up and do something? You sit down and shut your f*cking mouth!”

Did you miss the moment Dana White was getting some seriously weird enjoyment from McGregor’s rant in Canada? Many people did, but fortunately we managed to just catch that somewhat perverted moment when reviewing the footage.

MMAFighting.com captured the footage. Skip to 3:26 in the video below, for the start of a seriously messed up minute of footage. Keep an eye on Dana White, and what he is doing to the mic while McGregor speaks: 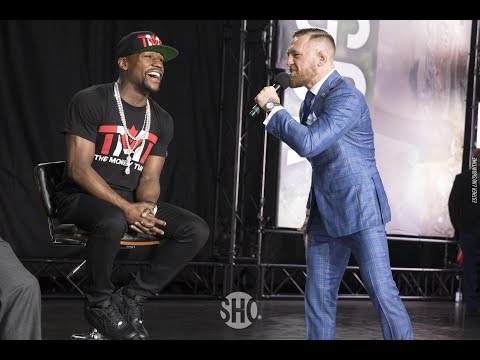 OK, so after reviewing the clip a couple of times now, it just keeps getting weirder. Dana White really did enjoy that!

“He should really be thankful,” McGregor said. “Before he fought me he was (getting paid) 20,000 to show and 20,000 to win. His 19th fight in the UFC, and he was on 40 grand. Now he’s a multi-millionaire. So, I don’t know why he’s sitting there so bitter. Maybe them smacks he took in that rematch messed with his head a little bit. I hope not, but I think they did.”

“There’s a few of them in the mix,” McGregor said. “A few of them need to pull their (expletive) together, though, and get interest going and get me interested. Right now I don’t actually see anything. That Diaz trilogy is also on my mind,”

Brian Page - Nov 5, 2015 0
Legendary kickboxing champion Tyrone Spong may be preparing for his third-ever pro MMA fight, but he recently refocused his anger on one of his...