I’m the two weight world champ, Conor McGregor can run for his life…

UFC lightweight/welterweight Nate Diaz has been involved with beef in Conor McGregor for going on a year now. Ever since calling out ‘The Notorious’ following his decision win over Michael Johnson, Diaz has trashed McGregor.

It wasn’t long until he got his chance to fight the Irish star, and he took hold of the opportunity with both hands. On just 11 days notice at UFC 196, Diaz shocked the MMA world with a stunning stoppage.

The infamous ‘cholo from the hood’ came in and tore the whole plan to pieces. Hoping they’d get McGregor through unscathed, the UFC had a whole mess to deal with after UFC 196. Diaz choked out McGregor in the second round, after rocking him with hard punches.

It truly was an incredible moment, but the Irishman wanted his pound of flesh, as did the UFC. An immediate rematch was booked for UFC 202, and one of the greatest fights ever would transpire.

McGregor would go on to defeat Diaz in a narrow decision, and then win the lightweight belt at UFC 205. Diaz’s displeasure in not receiving the trilogy fight has been clear, and who can blame him?

Now he’s hearing about McGregor getting a boxing license, Diaz is seriously annoyed. He asked himself for a release from his UFC contract to go to boxing, but was refused. During an interview with ES News, Nate Diaz said he’s going to quit MMA and go to boxing if McGregor is allowed to:

“I beat him at boxing straight up,” Diaz said. “He shot down because he was losing. The second time I beat him too. No doubt in my mind. Everybody that I see says I won the fight. I set a record on his head. He has the record right now for getting hit in the head more times than anybody ever in the UFC, and I set that record.”

“I’m going to get my boxing license in Cali and Nevada,” Diaz said. “I tried to get out of my contract years ago (to go to boxing) but they wouldn’t let me go.

“If they let him box (McGregor) then I’m going to box too. I’m going to win some fights and get out of this MMA shit that I’m not even into anyway. I think the whole thing is a publicity stunt. But if it’s not, I’m going to get in on it too,” Diaz said. They keep giving him titles to keep him away from me. I’m not chasing him down like everyone else. You (McGregor) can run for your life.” 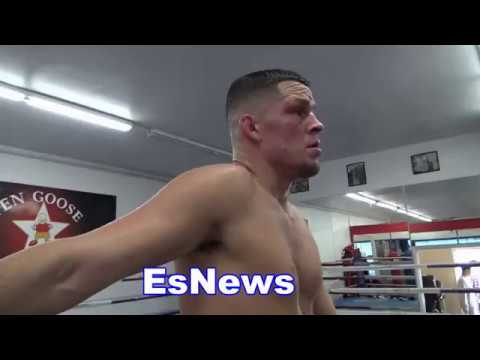 Gentleman Jeff - Dec 29, 2017 0
Dana White is confident Floyd Mayweather is not retired... Earlier this month, Joe Rogan revealed on his podcast that Dana White told him he was...

Five Pictures Of Old School UFC Fighters & How They Look...

UFC Fighters React To MMA Being Made Legal In New York