Khabib Nurmagomedov believes the reason he was placed on the UFC 205 prelims instead of the main card is because the promotion doesn’t want him to become too popular. He continued on to say the promotion needs to do this in order to “take care” of Conor McGregor.

Khabib, the UFC and Dana White have had a stormy relationship in recent months. Amongst other complaints, Khabib believes Dana and the UFC promised him a lightweight title shot that they have not delivered on.

Recently Dana White said that Conor McGregor’s next fight won’t be until the spring at the earliest. This likely means he will be vacating the featherweight title, since it has been 11 months since the championship has been defended. Conor might look to defend the lightweight title in the spring, or he might look for a super-fight. If he ends up defending the 155lbs title, there are 3 possible contenders: Nurmagomedov, Tony Ferguson or Nate Diaz.

Nurmagomedov went nearly 2 years between fights recently, from April 19th 2014 to April 16th 2016. Upon returning from a long layoff, Khabib has been dominant in wins over Darrell Horcher and most recently over Michael Johnson. Still, Khabib has the most wins of any undefeated fighter in the promotion, including all 8 of his UFC bouts. 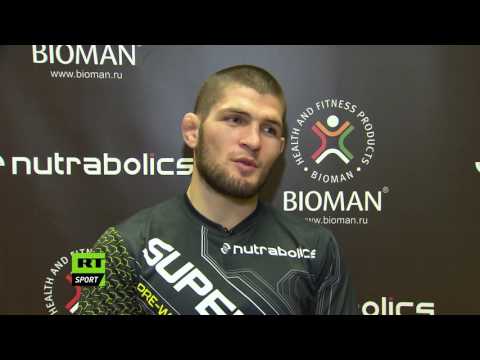 Tony Ferguson is another possible next contender for the lightweight title. “El Cucoy” is on a 9-fight winning streak, but is refusing to trash-talk his way into a title shot. After his most recent victory in Mexico City over Raphael Dos Anjos, Ferguson opted not to call out Conor McGregor or for a title shot. Instead Ferguson just politely said that he would fight whoever the UFC put in front of him.

The 3rd option for the next lightweight title shot is Nate Diaz. While Diaz’s record in the division is not as unblemished as either Nurmagomedov’s or Ferguson’s, he is the last person to defeat the champion.

If Conor opts not to defend the lightweight title, the obvious next fight in the division is between Ferguson and Nurmagomedov. It’s a bout the UFC has tried to organize before. The bout has been scheduled twice, but didn’t materialize either time. Khabib was forced to withdraw due to injury the first time, and then was unwilling to wait a month for Ferguson earlier this year.

The two were supposed to meet in April of this year, but Ferguson needed to move the fight back a month due to the discovery of fluid in his lungs. Instead of waiting for Ferguson however, Khabib chose to face last minute replacement Darrell Horcher.

“The fight could have been saved, and moved to May 29 in Vegas,” stated Ferguson shortly after having to pull out of UFC on Fox 19.
“Khabib was given that option, and the UFC even asked him about it. So for me, on my end, I was like look, man — you’ve pulled out of this fight a couple of times already. I didn’t know what injuries he had or how serious it was, I never asked those questions.”

A long awaited clash between the consensus top two in the division could finally come to fruition early next year.

Darren - Aug 11, 2018 0
Daniel Cormier Narrowly Missed Out on Becoming a Triple Champion When He Lost a Donut Wrestling Match to a Cop... This is the video that...

Dustin Poirier: “Losing to Conor McGregor Was Good for My Career”