The Notorious is not a fan of the BMF title. You’d have to assume that this is mostly because he’s not fighting for it. Do we sense some jealousy? Yes, for sure. Jorge Masvidal will battle Nate Diaz for the crown on Saturday night in New York. The pair will headline UFC 244 in Madison Square Garden.

It’s one of the most anticipated fights of the year. Fans love them for being so forthright and honest. In short, they both keep it real and that’s what is so endearing about them. Diaz comes from the tough town of Stockton, California. Meanwhile, Masvidal is a former streetfighter from Miami.

But McGregor definitely isn’t impressed. Neither of them has used much trash talk or theatrics like MMA’s most famous Irishman. ‘The Notorious’ trashed them both on Twitter after watching their pre-fight staredown. Who really cares what he thinks though?

I’m sad they didn’t get to shake hands up there like they wanted to and tried to. It was so sad seeing this. Its like a love story up there. OMG Its the notebook.
Now get out that fucking cheque book and donate to my charity and the real bad mans back

First of all, McGregor criticised the tame nature of their staredown. The Irishman considers himself the promotion’s real BMF. Hopefully, we never hear that acronym again after this fight. It’s almost as annoying as ‘champ-champ.’ McGregor went in hard on the two men. He tweeted:

“I’m sad they didn’t get to shake hands up there like they wanted to and tried to. It was so sad seeing this. Its like a love story up there. OMG Its the notebook.
Now get out that fucking cheque book and donate to my charity and the real bad mans back.” 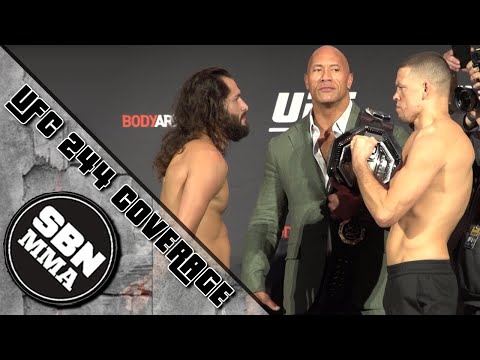 You can tell McGregor is jealous though. He later tweeted that he wants the belt ‘spit-shined.’ However, that won’t do him much good because it’s literally got the date of UFC 244 embossed in it. Furthermore, it’s the most expensive belt that the UFC has ever had made. According to Dana White, it’s worth $50,000. But maybe McGregor wants to sell it so that he can pay for his legal fees.

Meanwhile, Dwayne Johnson will be present the belt to the winner. It’s definitely a bit of a pantomime but as long as the UFC doesn’t do this too often it’s ok. This is the promotion’s 500th ever event so they definitely had to mark it in some way. A penny for Kamaru Usman’s thoughts though.

Tell them I want that spit shined. https://t.co/6Yci9w9Wcf

The winner of the BMF title can expect a fast track towards further glory. McGregor has said that he wants to fight the victor. If it were Diaz then this would complete their epic trilogy. However, a Masvidal fight would be just as exciting. Alternatively, they could be next in line for a title shot. Kamaru Usman will first defend his belt against Colby Covington.

McGregor is due to fight on August 18th. Donald Cerrone is his most likely opponent. It will be the first time that the Irishman has fought in over a year. His last appearance was a defeat to Khabib Nurmagamedov. Now he’s looking to get back on track and make people like him again. Good luck with that.

The Notorious is facing a number of legal battles over the coming months. He’s been fined €1000 for an assault last April. McGregor never learns. The train keeps rolling.

Anthony Edwards is the #1 Pick! Wiseman and Ball

John - Nov 20, 2020 0
The Minnesota Timberwolves have selected Anthony Edwards as their number 1 pick. Edwards is a guard that can shoot effortlessly. It could be a...