Talk about a controversial accusation. Trash talk is one thing, but these latest comments might be pushing it a little too far. Have a read and see what you think….

UFC featherweight champion Conor McGregor is a long way from home in many respects on Saturday March 5. He fights two divisions above the weight class he beat Jose Aldo at during the UFC 194 main event, and faces a fighter with a bigger reach and height advantage.

Nate Diaz will be the man ‘The Notorious’ hopes to conquer in his welterweight debut, after his original opponent Rafael dos Anjos dropped out of the pay-per-view card with a broken foot.

As expected, the trash talk has been rife between the two outspoken fan favorites, but now Diaz’s boxing coach Richard Perez has some pretty serious accusations about ‘The Notorious.’ Check out his comments courtesy of Submission Radio: 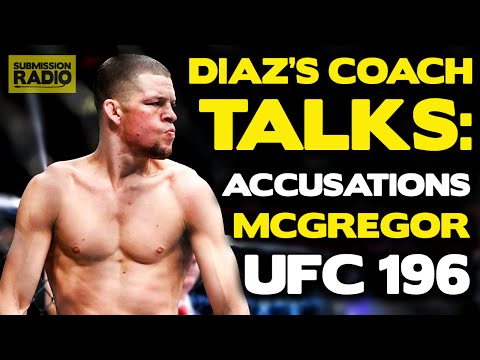 “So if you think about it, he was focusing on training at 155. He only had two weeks to go. And all of a sudden he’s gonna jump to 170? So no, there’s something going on.”

“When Nathan mentioned it to him, he got defensive, he got angry,” he continued. “If somebody would have told me that I was fighting and he told me, you know, steroids, I would laugh and say, ‘yeah give me some more steroids, heck yeah, ah ha sure’. But he got defensive and mad, you know, “I’m not on steroids, I’m not on steroids!” You know, he was like trying to defend himself. So that, just his actions and the way he talked, there’s something behind that.”

“I mean, two weeks ago – and you know, if you’re a fighter and you’ve been training for two months or so and you’re already cutting your weight down, so in two weeks you should be close to 155,” he said. “So all of a sudden 155 to 170? Oh boy, that’s a big jump. So there’s something fishy going on there.”

Fedor In Negotiations With The UFC For HUGE Fight

Six Catastrophic Comebacks That Should Never Have Happened