Conor McGregor has been charged with assault for punching a man last April. ‘The Notorious’ made headlines for striking the man in his 50s for allegedly turning down his whiskey. Up until this point, it was unknown whether or not the Irishman would face a criminal investigation for the incident.

The incident allegedly took place in the Marble Arch pub in Drimnagh last April. Allegedly, McGregor bought a round of shots of his whiskey for the bar, but his victim rejected it. McGregor threw a suckerpunch after words were exchanged between the two men.

Now as reported by the Irish Independent, McGregor will face charges. According to the publication, the assault charge carries a maximum prison sentence of six months and/or a fine of $1646. Even worse for ‘The Notorious’ is the impact a conviction could have on his ability to get a visa for the United States. 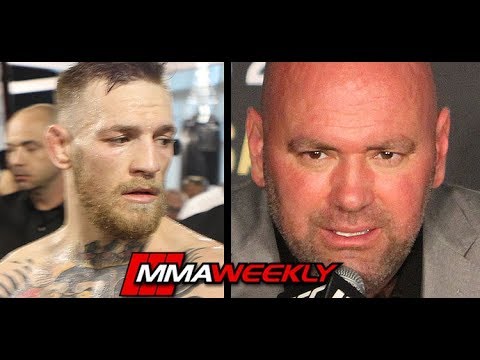 Last month the Irishman spoke to ESPN’s Ariel Helwani about the incident. He openly admitted that he was in the wrong. But in all seriousness, what else could he say? The ‘alleged’ footage is fairly damning.

“I was in the wrong,” McGregor said. “That man deserved to enjoy his time in the pub without having it end the way it did. … I tried to make amends, and I made amends back then. But it doesn’t matter. I was in the wrong. I must come here before you and take accountability and take responsibility.”

McGregor recently recovered from a broken hand that he suffered in a training session. The former two-weight champion admitted that he had let everybody around him down by his ridiculous antics. UFC President Dana White has said that McGregor will come back in early 2020, but that remains to be seen. Will the US even allow him back in the country?

McGregor has not fought since losing to Khabib Nurmagamedov back in October 2018. The Irishman has had a number of issues in the real world since then. Florida police arrested McGregor for the destruction of property outside of a nightclub. The New York Times has also linked McGregor to a sexual assault case.

This went unreported for a significant amount of time, as Irish law prevents the media from reporting such cases until charges go through. Only time will tell whether or not this story develops. One thing is for sure, McGregor is making life a lot more difficult than he needs to. Will the UFC allow him to come back in 2020 if he keeps this up?

Darren - Dec 14, 2019 0
Perhaps Dana White should have been more careful when he said that Khabib Nurmagamedov is the man now. The Russian seems to have taken...