This week has been another one jammed with news and updates about former UFC women’s bantamweight champion Ronda Rousey. Her Wrestlemania 34 match rapidly approaches on April 8, with her run of TV appearances getting plenty of attention this week.

‘Rowdy’ last fought in the Octagon at UFC 207 where she was hastily battered by the reigning bantamweight queen Amanda Nunes. The second loss in her MMA career came 13 months after Rousey was brutally knocked out by Holly Holm. ‘The Preacher’s Daughter’ was a record-breaking underdog prior to UFC 193.

The backlash from fans, media, and fellow fighters saw Rousey step back from the fight game. Although she never admitted that she’s retired now, neither did UFC president Dana White, her signing with the WWE this year told us all we need to know.

During her appearance on ‘Golic and Wingo’ this week, Rousey gave her opinion on the topic of Floyd Mayweather joining the UFC. Since defeating Conor McGregor in their unlikely boxing match last year, ‘Money’ has been fuelling rumors of a move to MMA. 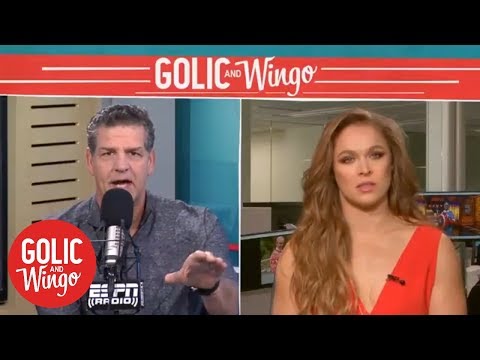 “Yeah, that will never happen, it’s all talk,” she said, saying that if there were even the slightest chance of him making the move, it simply wouldn’t work out well for him. “I mean, different strokes or different folks, but I don’t think he will do good at all.”

“I wouldn’t really relate the WWE to the UFC as I would relate it to choreography for mvie fight scenes. Kinda like ‘Oldboy’ where they had the fight scene all in one take and they were fighting like 6 minutes non stop.”

That’s the kinda thing these athletes are doing in the WWE but without six weeks to practice it. It really is amazing.”

Then there’s this somewhat awkward moment that didn’t get aired in the full clip:

“‘There’s a possibility that I could go back in time?’ That’s your question to me?” Rousey replied. “I do not have the ability to go back in time, no.”

With Rousey’s first WWE match yet to have an opponent attached but booked for April 8, the final nail in her MMA career is surely hammered down. Realistically, there’s no way even the UFC could justify bringing her back after her latest experiences inside and outside their Octagon.

PHOTOS: Sage Northcutt Looking More Ripped and Shredded Than Ever