If this is the continuation of Conor McGregor’s massive fall from grace, he’s doing it in the craziest way possible. Eyewitnesses claim McGregor was involved in a scandalous incident last night…

Over the years in MMA, we’ve seen meteoric rises to the top of the sport. Although he was preceded by megastars like Anderson Silva, Ronda Rousey and Georges St-Pierre, nobody has reached the levels of fame that Conor McGregor currently boasts.

With the UFC still seeking their keep in mainstream sports, superstars are essential to the brand’s growth. When ‘The Notorious’ came to town in 2013, he was a breath of fresh air for the promotion who essentially had Rousey at the time and no-one else.

Using his brash personality and unique fighting style, McGregor was an overnight superstar, and just when the UFC needed it. Fast forward four years, and it seems the UFC’s biggest star is rapidly spiraling out of control.

During a strange night of reports from various sources in Ireland, Conor McGregor has been linked to the assault of two men in a pub. At the moment there’s no concrete evidence ie video or photos, but the statements given by people who were there are concerning.

Below you’ll see a screenshot of a pub-goer who claims they witnessed McGregor ‘boxing the head off’ a young man, followed by the statement from Irish police. It’s worth noting one of the men allegedly hit by McGregor has serious gangland ties: 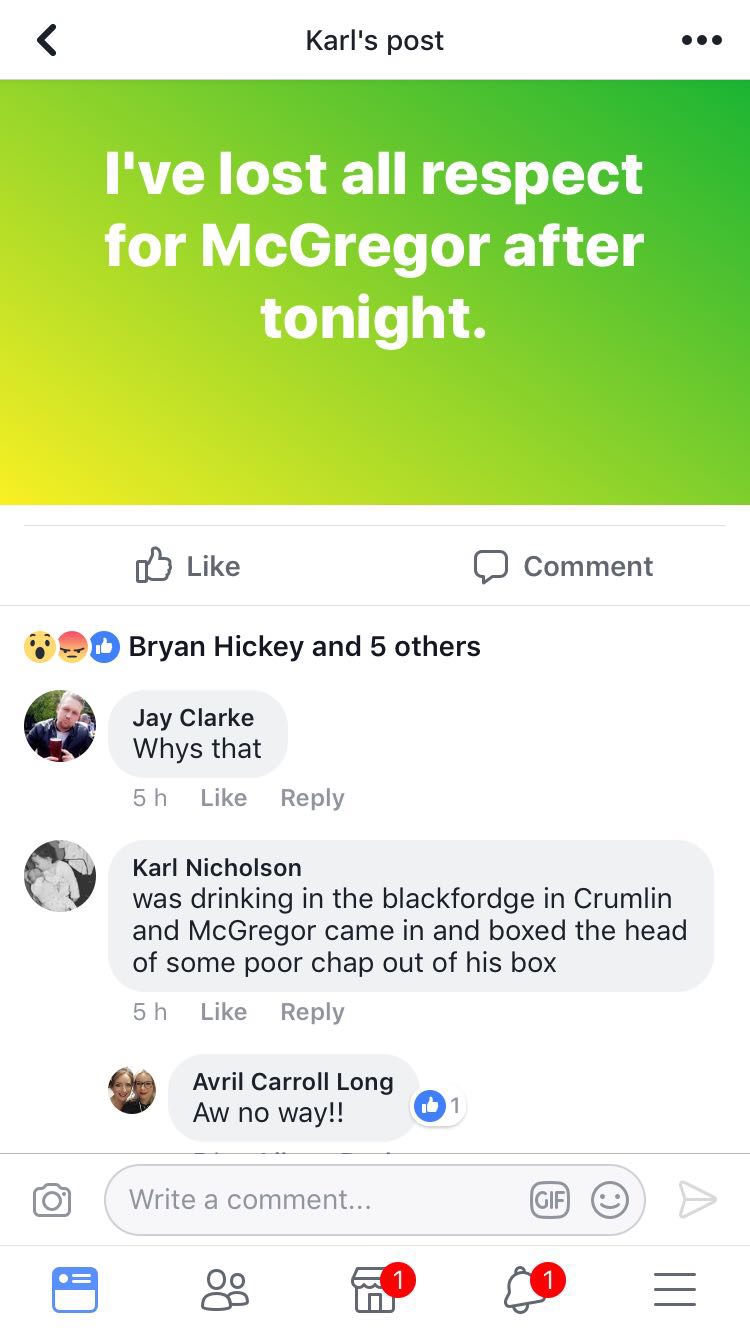 “There is no report on this matter and no complaint from any injured parties, patrons of the pub or the pub itself and no statements were taken,” a senior source said.

A well-known Irish sports star has assaulted a close associate of a senior Kinahan cartel henchman in a south Dublin pub. It is understood the sports star attempted to assault another young man in the pub, when Whelan’s associate attempted to intervene before being punched twice in the face.

During the row, a man in his 50s with close links to convicted drug dealer Graham ‘The Wig’ Whelan (35) was punched.” Gardaí believe the incident is linked to another alleged assault carried out by the sports star earlier this month. Source: Independent.ie

Those more observant will note this isn’t the first time McGregor has been linked to Irish gangland figures, as he was alleged to have taken part in similar activities earlier this month. After his outbreak at the Bellator brawl, this is not a good look IF true.

Although the report never names Conor McGregor in specific terms, who else could they be referring to? McGregor was named by numerous individuals there last night in Crumlin and was reported to have been under surveillance by the Irish police this year.

Perhaps a coincidence, but McGregor’s post on Instagram 5 hours ago seems eerie considering the reports about an ‘Irish celebrity’ involved in gang war:

Darren - Apr 23, 2019 0
This Could Only Happen in the Sunshine State... Watch as the Easter Bunny Defended an African-American Woman by Beating Up a Florida Man...  In one...