This year new revisions were made to the universal rules of MMA. But many wonder if all the regulation surrounding MMA hasn’t taken us farther away from the true nature of the sport. If MMA is supposed to be as close to a real fight as possible, we’ve certainly strayed away from that.

After UFC 5, Royce Gracie said he was leaving the UFC because the new rules were too far removed from the “Gracie Challenges” that had been organized by his family for generations. Weight classes, judges, and rounds don’t occur in a real fight, so according to Royce they had no business in MMA. Of course, he may have just left the UFC because the level of talent was starting to increase, but that is neither here nor there.

The truth is that almost all of the ideas in this article are being tried out by some promotion somewhere around the world. Many small promoters are challenging MMA’s rules, and hoping to create something new that fans and athletes might gravitate to more.

Cro Crop just won Rizin’s 2016 Openweight Grand Prix, which was a fun tournament. But remember when Pride would put a giant sumo guy against a much smaller opponent? We never get that anymore. Bring back Dream’s Super Hulk tournament and get us back to the fun old days of freak-show fights!

Why not organize a few fights a year with a jiu-jitsu guy, say Dillon Danis, and put them in there against a giant sumo guy just to see what happens. There is an art to a much smaller opponent defeating a very large adversary, but sadly no MMA gym is teaching it anymore because those bouts don’t happen nowadays.

In case you miss those bouts as well, check out Royce Gracie vs. Akebono from Dynamite: 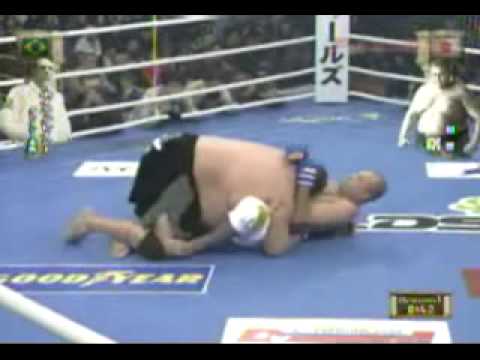 Darren - Nov 18, 2019 0
The bare-knuckle boxing scene is on the rise. After another successful event in Mississipi, BKFC are already planning their next morally reprehensible event. You've...