Jon Jones’ team maintains his innocence as his title is stripped…

Jon Jones has largely gone radio silent since news broke of his most recent failed drug test. He has posted some cryptic tweets, but for the most part, Jones has stayed quiet even as the UFC Light Heavyweight championship was stripped from him for the 3rd time.

Mike Winkeljohn, of the Jackson-Wink team out of Albuquerque, appeared on submission radio recently. He gave the public some insight as to what Jones’ camp is feeling about the situation.

Winkeljohn made it clear everyone at Team Jackson-Wink is supporting Jones. Not only that, but they don’t believe he knowingly took any banned substance and are convinced this will turn out to be another case of a tainted supplement

“Jon Jones had been tested multiple times going through the fight camp. He would not do something like that. The problem is the public perception that thinks he’s got the needles and throwing steroids in his arm.

Don’t get me wrong, I understand Jon has messed up in the past. He’s got caught drinking and driving, he’s done some bad things. He’s done things that are idiotic but he’s grown up. As far as taking steroids, what he’s been busted for is taking a Viagra or Cialis from Mexico that had something in it, that’s not steroids, but it came up that way.”

It seems the crew in Albuquerque believe Jones became the greatest in the world through genetics and hard work. At least that is what they are saying anyway.

Mike Winkeljohn On If Someone Double-Crossed Jones

Not long after it was revealed Jones had failed another drug test, Joe Rogan speculated on his podcast as to whether or not someone could have spiked Jones’ drink or food. Winkeljohn, however, doesn’t feel this could have been the case.

Winkeljohn stated he didn’t think those who stood to benefit from Jones’ downfall would have had access to him during the time they would have needed to spike his drink. He seems firm in his belief that Jones’ drug test failure was due to accidentally drinking or taking something he didn’t believe was a supplement.

There are evil people out there, but I don’t think those people have access to him. I think it was just a mistake.

Mike Winkeljohn On What He Thinks Caused Jones’ Failed Test

Winkeljohn would continue to state what he believes caused Jones to fail another drug test:

If I had to take a guess it’s going to come out that it’s something he took to rehydrate himself after his cut.

Some kind of substance that he thought wasn’t a supplement. Something somebody said “hey this makes you feel better, it’s got electrolytes in it and stuff” but it was tainted. Everybody thinks “oh that’s an excuse” but no really that’s it, that’s what it’s going to be.”

You can list to the full interview in the player below: 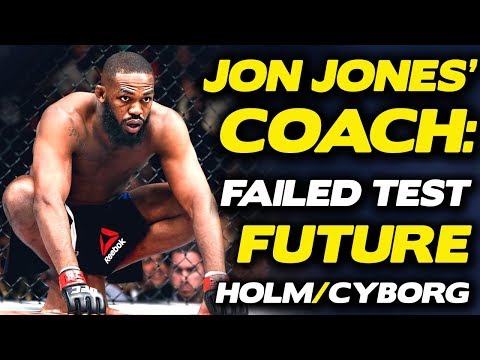