Owen Roddy is one of the best MMA striking coaches in the business. He’s helped Conor McGregor crack his way to four titles, including two UFC belts. The Irishman has just opened his own gym, SBG Charlestown, in Dublin, as the brand spreads across the country.

Roddy was a professional MMA fighter in his own right before injuries forced him into a coaching role. He’s seen as a brotherly figure for McGregor and is one of only a few men that the ‘Notorious’ respects. While John Kavanagh is the brains of the operation and head coach of SBG Ireland, Roddy took the lead for the Mayweather fight.

Now it looks the McGregor is set to make his Octagon comeback after two years without stepping into the cage. The man he’s most likely to face is Khabib Nurmagamedov. Roddy believes that his student can beat anybody, whether it’s ‘The Eagle’ or ‘GSP’. 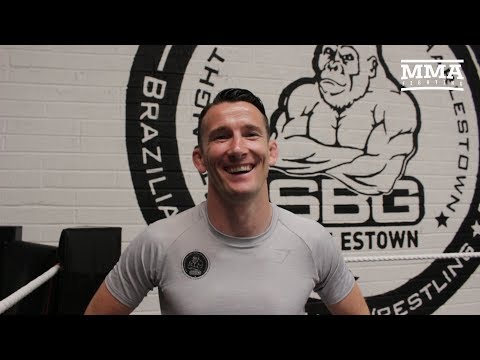 As far as Roddy is concerned nobody is perfect. He believes that there are flaws in both George St. Pierre and Nurmagamedov’s games. Both are excellent wrestlers and BJJ experts, which on paper are McGregor’s kryptonite. However, Roddy thinks McGregor has enough about him to devastate them both. He told journalist Mike Sheridan at a Q&A session:

They both do what they do really well, but at the end of the day, for me, what Conor has over all of them is he’s so good at landing shots, he lands a shot within the first minute and 99 percent of people can’t take it. In those small gloves, he is going to catch you, he’s going to catch you on the chin or on the temple and there are very few people who can deal with that.”

That’s why McGregor is a two-time UFC champion and why Roddy and John Kavanagh are regarded as two of the best coaches in the world. The battle is often won before the fighter even steps into the cage. Preparation is key.

“We’ll find the threats and look at how to nullify them,” Roddy said. “Then we look at the flaws and see how we capitalize on them. It’s not just me, it’s a team effort: it’s John, it’s Conor — Conor has a huge input on what shots he uses. He’s such a smart fighter. People think he just goes in and lands the left hand, but it’s everything before — he’s leading people into that position and he’s very good at doing that.”

McGregor is highly likely to make his comeback in October this year. Khabib Nurmagamedov’s manager Ali Abdelaziz believes that the Irishman needs the cash. He might not be wrong. With lawsuits looming, legal fees to pay off, and Conor Jr. to look after, $100 million won’t last long.

Khabib Nurmagamedov is definitely McGregor’s most likely opponent. He confirmed that the UFC is in negotiations. All that they are waiting for is the conclusion of the Notorious’s New York legal problems. If, as expected, his plea agreement is successful he’ll be free to do as he pleases. Again.

Darren - Jun 1, 2018 0
In a Dramatic Turn of Events, Yair Rodriguez is Back in the UFC After Being Harshly Released... Fight fans were stunned a few weeks ago...

Kevin Holland calls out Khamzat Chimaev after his win against Souza