When Valerie Loureda broke onto the scene in Bellator, many fans stood up and took notice. Her exciting Taekwondo based style made her great to watch as she destroyed the poor girl thrown in front of her like a sacrificial lamb. Now Bellator has picked another randomer to face her.

We had meat packing factory worker TJ Jones take on Jack Swagger a few weeks ago. Now Bellator is getting creative in the women’s divisions, by getting a Hooters server to take on Loureda. Lauryn Dasch hails from Michigan and is 0-1 in her MMA career so far.

Dasch lost a unanimous-decision loss at Motor City Cagefights 5, which took place April 12. According to her Tapology page, Dasch went 4-3 as an amateur. She’s being thrown in against an Olympic standard athlete. This is not going to end well.

BREAKING: @BellatorMMA has signed Flyweight Larkyn Dasch (0-1) to fight Valerie Loureda (@valerielouredaa) at Madison Square Garden on June 14th. Fight will be on the prelims.

…and honestly, Dasch signing her contract at @Hooters while in her Hooters uniform is tremendous. pic.twitter.com/SoLM9AF1vH

Some people on the internet were not so nice in their commentary about Dasch. They suggested that she was signing her Bellator fight contract in her Hooter’s uniform so that she could market herself and go viral across the internet. Like that’s a bad thing?

“I was working double shifts at Hooters all week, from morning to midnight, to free up time for me to make a planned trip to Nashville to visit family,” Dasch explained. “So I was working when my manager brought me the contract to sign. He came in, ordered food, obviously, and had me sign the contract right there while I was on the clock.”

Anyway, Conor McGregor literally had the UFC advertise his whiskey company on the edges of the cage when he fought Khabib Nurmagamedov and shamelessly promoted it at every media event. There’s nothing wrong with an upcoming fighter trying to get a bit of positive attention. 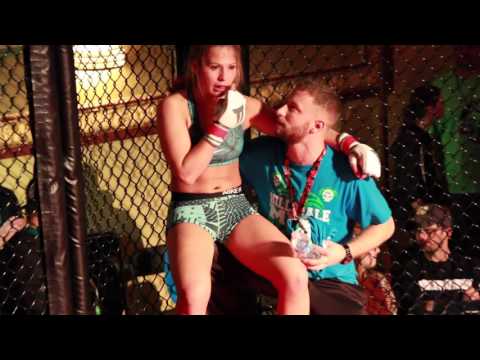 Bellator clearly and understandably is planning on building Valerie Loureda as a star. The former Taekwondo champion is still only 21 years old and has the skills and looks to become an MMA icon. She has yet to be tested by a proper wrestler and you can bet that Bellator will protect her for as long as possible.

“Actually, I have never heard of her,” Dasch said of Loureda. “I follow Bellator and the UFC, but at the same time I know there is the potential that I could one day end up fighting those girls. And I don’t like to know my opponents.

“I would rather my coaches tell me exactly what I’m supposed to do, give me a gameplan and then go in there not knowing who this girl is, because at the end of the day she’s just another female fighter who trains every day and has the same struggles that I do.”

Dasch appears to be very loyal to the Hooters brand. She’s proud of where she works and of being a hardworking person who can balance a career as a professional athlete with a part-time job to make ends meet. When asked whether or not she would be repping the iconic Hooters badge on her fight uniform on the night, she said:

“That is still undecided,” she said. “We’re still trying to figure out what we’re going to do, but it could be that way. We’ll see.”

There’s definitely a niche there for her to exploit. The Hooters MMA fighter. It’s got something about it…

John - Mar 17, 2021 0
It seems that the trash talk has commenced as Gamebred posted via his Twitter account regarding the betting odds for Usman goes for his...