When Art Davie and the UFC helped to usher in the modern era of mixed martial arts, the sport was meant to mimic a real fight.

Unfortunately many people, most notably Senator John McCain, objected to this. He called the sport “human cock fighting” and set out to have it thrown off of PPV. Following the debacle that was UFC 9, McCain was temporarily successful. In order to get back on PPV, the UFC needed to adopt many rule changes. These rules changes took MMA farther away from real fight scenarios, and pushed legit vale tudo competitions underground.

Today most high-level martial artists train in MMA, but some aren’t afraid to compete in the much more dangerous and violent world of underground vale tudo bouts. Doing so is the only chance today’s martial artists have to test themselves in the same way the sport’s pioneers did.

Nick Diaz was born in 1983, missing the cut-off to participate in the sport’s pioneer age by about 8 years. As a result Nick would never get the chance to compete in a bare-knuckled, vale tudo style fights promoted by the UFC or another large organization.

That didn’t stop a 19-year old Nick, who had just turned pro the year before, from competing in a bare-knuckled fight in 2002. This fight appears to be closed to the public, and taking part in what appears to be an elementary school gym. 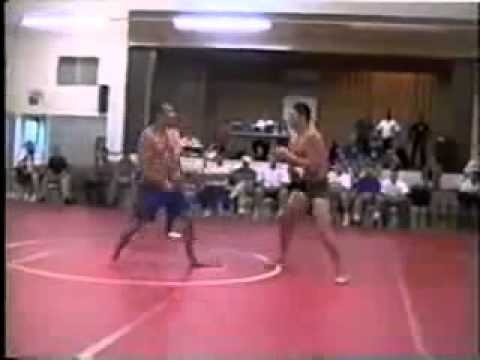 Nick’s brother Nate, who was all of 16 at the time, also fought that day. The two gyms decided it would be best for Nate to take on a dude who looks to be in his 40s with a dad-bod.