Another day, another challenge for Conor McGregor. This time it is UFC Welterweight Champion Tyron Woodley looking for his ‘red panty’ night. With the ‘Notorious’ being inactive since November 2016, fans and fighters are getting more and more frustrated. Many are wondering how much longer the UFC can wait before they strip him.

Woodley himself hasn’t had the easiest ride as a champion. Since taking the belt from Robbie Lawlor, he has defended twice against Stephen ‘Wonderboy’ Thompson and beaten Brazilian Jiu-Jitsu specialist Damian Maia. His dominance comes with its own set of drawbacks.

The American’s main problem is that many fans think he is boring. His last two fights in particular have been extremely technical. While purists and hardcore fans have appreciated his skillset, it hasn’t always been easy on the eye for mainstream audiences. Woodley, in an interview with Fox Sports, has a novel solution both for himself and McGregor. He said:

“He likes to make history, he likes to break records. I say strip him. Then let him come up to welterweight and try to come for a third belt.”

McGregor has of course fought at welterweight before. Both of his epic fights against Nate Diaz were fought in this division. Originally the pair agreed to fight at 170 because Diaz didn’t have time to cut to 150 for a lightweight bout to replace Rafael Dos Anjos. However, when McGregor lost the first fight, he wanted a rematch in the same circumstances to prove that he could beat his rival.

While both of those fights were highly entertaining – and a lucrative trilogy fight with Diaz is still an option – it is debatable whether McGregor could handle a bonafide welterweight. Although Diaz had a couple of previous welterweight appearances, he has overwhelmingly fought as a lightweight in the UFC.

In both Diaz fights, McGregor’s added weight mass resulted in him gassing out. Also, his notorious left hand – devastating in the Featherweight and Lightweight divisions – didn’t quite have the power to finish Diaz. It remains to be seen how he would cope against a proven welterweight like Woodley or Stephen Thompson.

More significantly, if McGregor was truly able for the weight-class surely the UFC would pair him off in a super fight against Georges St-Pierre? Giving him a title shot would also send ripples of anger through the division with the Irish man was jumping ahead of more legitimate contenders. 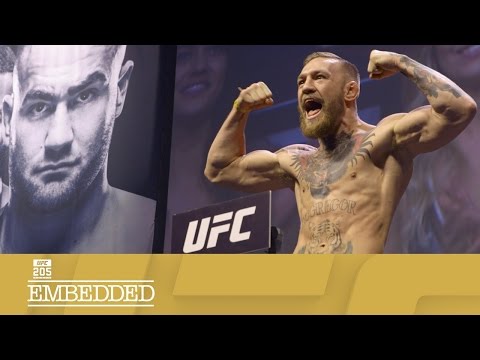 Remember Rafael Dos Anjos was promised the next shot against Woodley. He will hardly be happy if the UFC passes him over for an unranked fighter. It also would continue to reduce the value of rankings, a trend that has emerged since WME-IMG took control of the UFC from Zuffa.

It’s also a risk. The Welterweight division has slowly, in the last year, emerged into one of the most interesting in the organization with exciting prospects such as Colby Colvington, Darren Till and Kamaru Usman all on the rise. However, promises and rankings don’t matter like they used to in the UFC.

The more lucrative the fight, the more likely it is to happen. Woodley and McGregor do have previous beef, having had a squabble at the weigh-ins at UFC 205, as can be seen in the video above. Maybe the opportunity to win a third belt might be the carrot that McGregor needs to come back and cement his legacy in the sport. You can’t blame Woodley for trying.