Tyron Woodley can’t seem to catch a break. All he wants is his ‘money fight’ and he just can’t get it. Allegedly he was in negotiations before Christmas to fight Nate Diaz. However, these fell through. Then he wanted to welcome Georges St. Pierre back to welterweight. Nope. Not happening.

Now to infuriate Dana White’s least favorite champion, even more, the pair has been heavily linked, by the UFC president himself, to a potential fight in Los Angeles in August. The fight would take place at Diaz’s natural lightweight. Woodley is not impressed.

The welterweight champion is currently recovering from shoulder surgery. In the meantime, Rafael dos Anjos and Colby Covington are set to battle it out for a totally unnecessary interim title. At least that’s how Woodley sees it anyway.

Woodley has a well-documented rough relationship with UFC president Dana White. It’s no surprise then that his interests aren’t exactly the priority for the company right now. Especially after his uninspiring victory over Stephen ‘Wonderboy’ Thompson. He told TMZ:

“Let me say this in a very educated way: I think that those two guys ‘contemplating’ fighting is the hugest bitch move on the planet.”

That’s fairly clear. However, if GSP and Diaz did fight, both men would make a bucket load of dollars each. Surely, ‘T-Wood’, of all people, can appreciate that? At the end of the day, money makes the world go around.

The Missouri native targeted Georges St. Pierre’s alleged desire to drop down to lightweight, after moving up to middleweight. For some reason, he thinks that the man with the most title defenses in 170lb history, and arguably the UFC’s all-time-greatest ever fighter, is running scared.

“If you’re going to be welterweight champion of the world and the lineal champion and you got the current champion constantly talking about fighting you, not only do you avoid fighting him and go up a weight class, now you’re gonna drop underneath him and fight underneath in a weight class that you’ve never fought in your life.”

After a four-year hiatus St. Pierre did return, this time at middleweight against Michael Bisping. He proceeded to win his second division title. You’d imagine that the attraction of a potential Diaz fight would be to see how effective he is at lightweight. If he won that fight he’d definitely be on course for a title shot in a third division and make more history. 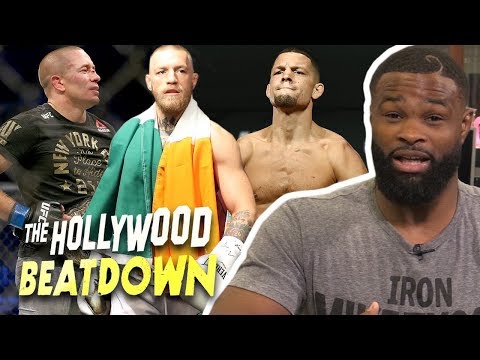 St. Pierre’s team have made it clear in the past that the Canadian doesn’t care about money that much unless it’s a number he can’t turn that. He’s already made his fortune. What he wants is to seal his legacy in the sport. ‘Rush’ is the UFC’s fourth two-weight champion. He wants to be the company’s first three-weight champion. It’s that simple.

It’s not in anyway disrespectful to Woodley to say that he’s just not an exciting enough option for GSP right now. Because at the end of the day he’s not. The best way T-Wood can get himself a money fight is if Khabib Nurmagamedov moves up a division.

Nerdy Girl Looks Like She Can’t Fight, But Then She Gets...