Well at least we know he’s back in training. Nick Diaz decided to show off to the world an infected elbow wound yesterday. Thanks, Nick. You really didn’t need to. It’s actually disgusting. Elbows are not meant to leak like that.

If you’ve come this far, you’re going to watch the video. It’s not nice. Diaz’s elbow basically breaks its water. Or urinates. Elbows don’t typically do that. Mine never has. It’s amazing the weird and seemingly endless range of injuries that you can get from training in MMA.

He milks it as well in a way that would make Dr. Pimple Popper proud. Some people find these videos therapeutic so if that’s your thing then more power to you. Not for me. If he does make an MMA comeback, he should just wave his elbow in people’s faces, make them recoil in disgust and then sucker punch them. It would work.

Diaz has been out of action since 2015 when he fought Anderson Silva in the middleweight division. While he lost on the night, the fight itself was overturned to a no-contest. Silva tested positive for PEDs, while Diaz tested for marijuana. You get the feeling that with the amount of weed Nick and Nate Diaz have smoked, they’re probably part plant now.

A firm fan-favorite, it’s no wonder that there’s a great expectation for him to return. He’s been linked to a fight against Michael Bisping, but that’s looking increasingly unlikely. Teammate Jake Shields broke the news that he is training, so we’re not making it up, we promise.

Diaz also went on a bit of a mad rant the other day, when he literally blamed poison (the substance, not the band) on causing him to lose to Georges St. Pierre back in 2013. The pair fought in Montreal, Quebec, Canada, and ‘Rush’ would go on to take a unanimous decision.

His dramatic statement came in reaction to the news that his younger brother Nate was being linked to a fight against the Canadian all-time-great. Diaz made it very clear that he does not want this fight to happen. He told TMZ Sports:

“I think whoever tries to make that fight, I’m gonna have to give him a backhand slap. I fought the dude. They poisoned my IV with some weird ass drug.” 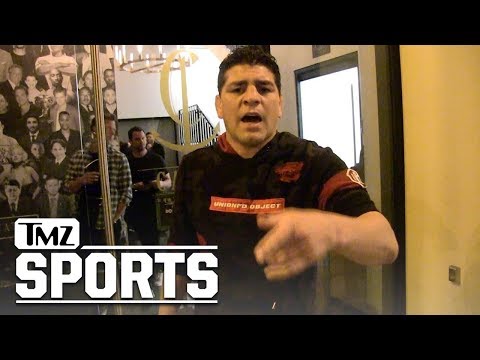 That’s obviously a very bold and unprovable allegation. With his elbow leaking the way it is right now, maybe he was poisoned because that’s just not right. Maybe he should go to a doctor or cut it off or something.

Younger brother Nate does look set to return this year but seems to be holding out for a third fight against Conor McGregor, which he’s just not going to get right now and needs to accept. The UFC is desperate for the Diaz brothers to come back. Even if they don’t win, they make things interesting. And that’s what matters.

Tyson Fury is not UNDERESTIMATING Wilder

John - Oct 4, 2021 0
In an interview with Tyson Fury, he has said that Wilder is more dangerous than ever and won't underestimate Wilder despite dominating him in...

Dana White Reacts To Ronda Rousey Getting Knocked Out At UFC...