The Viral Russian Hulk Boy With the Massive Neck Has Only Gone and Made His MMA Debut… Watch as Tamaev Axsab Unleashes a Savage Beating on His Opponent… Skip to the 19:20 Mark of the Footage Below and Enjoy the Carnage…

Tamaev Axsab is a big guy. Only 17 years old, he’s absolutely massive. The kid has gone viral across the internet because of his staggering size and strength. Of course, he’s Russian, they don’t make them like that anywhere else in the world.

Possessing a remarkable 20-inch neck, Axsab is an absolute beast. There are videos of him pulling cars with his neck, while if you go on his Instagram, you’ll see that he’s been practising boxing and wrestling of late. He’s also got better facial hair than men 10 years older than him.

Now footage has emerged of Axsab fighting on his professional MMA debut. Sure, he’s still only 17, so he probably shouldn’t be getting punched in the head, but this fight is actually pretty good. Round 2 is an absolute slugfest. 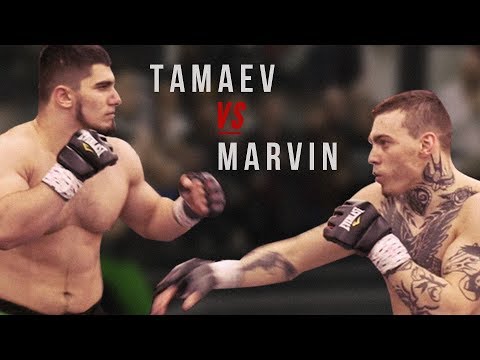 Facing a guy named ‘Melvin,’ Axsab looks relaxed and confident in the cage. Ok, we’ll admit that not much happens in the first round. Melvin uses a really strange guard, with his front hand extended to keep distance. He does eventually get taken down at the end of the first.

However, it’s in the second where the carnage erupts. Skip to about the 19: 30-minute mark of the video and you’ll see the two men bite down on their gumshields and just swing at each other. All technique goes out of the window, this is just about causing as much damage as possible. Ultimately, Axsab is the winner with his superior strength punishing his opponent.

Axsab is definitely doing the right thing to get noticed. While he needs to do a lot of work on improving his technique, the fact is that he’s 17-years old and is an absolute beast. Combine that with a couple of years of training and we could have an absolute savage on our hands.

The likes of Polish promotion KSW will surely be keeping a keen eye on Axsab. Lacking morals and loving a freak fight, KSW is like a contemporary European reincarnation of PRIDE, and you can bet that if Axsab continues down this road into MMA, he’ll likely end up there soon. All he needs to do is keep winning, it’s really that simple. At the time of writing, this video had over 6 million views. He’s definitely got star potential.

Speaking of massive proportions, Martyn Ford is set to take on Iran’s Sajad Gharibi very soon. These two behemoths might contain more juice than a Capri Sun factory, but they’re set to go head to head early this year. Fighting for KSW is different from other MMA promotions. The Polish organization emphasises spectacle and only puts on 5 events per year.

What is it about these freakshow fights that’s just so enthralling? Watch this space, because Tamaev Axsab could be there soon!

Darren - Nov 10, 2019 0
The worst thing was that they weren't able to smash each other to oblivion. The Youtube stars headlined an event on DAZN, promoted by...

Leon Edwards is one of the most UNDERRATED Welterweight

How Much Money Did Conor McGregor Make Earlier In His Career?