Paulie Malignaggi and Artem Lobov are set to fight in bare-knuckle boxing at BKFC 6 this weekend. The fight will go down in Florida and ‘The Magic Man’ is finally going to make his debut in the sport. There has been a lot of build-up to this one and they’ve developed a toxic rivalry.

Malignaggi sees this fight as the first rung on the ladder to fight Conor McGregor. It’s like a video game where if you beat the lower-level bosses, you move on to fight the final one. Now the chances of that happening are slim. Lobov is taking this seriously and has been through the wringer of a bare-knuckle fight already.

Lobov and Malignaggi’s team have clashed multiple times. There have been insults, shouting, shoving and spitting, but now Lobov went head-to-head with a member of the New Yorker’s team. 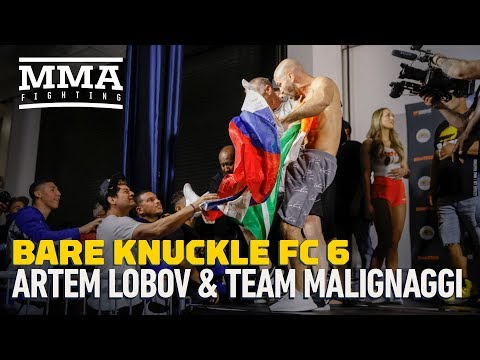 We’ve seen the camps clash in the past, but today things kicked off again. Lobov had weighed-in and raised his Irish and Russian flags up in front of the crowd. A member of Malignaggi’s team said something to disrespect the GOAT. Lobov went forward straight away and the two men had to be pulled apart.

It was all very silly and unnecessary, which you could say about everything to do with his fight. We’re going to watch it though and we’re hoping Firas Zahabi is right when he says Lobov could win.

Needless to say, Lobov has about as much time for Paulie Malignaggi as the rest of the MMA community. ‘The Magic Man’ has regularly insulted MMA fans as well as his current opponent. He’s done nothing to endear himself and his spitting incidents are just disgusting. We’re predominantly an MMA publication and think he’s a clown.

“Come on now, no one respects this guy. How could you respect this guy?” Lobov said, per MMA Fighting’s Damon Martin. “I guarantee you his own parents are watching him at home going ‘where did it all go wrong?’. Like ‘how did we not bring this guy up the right way, what is wrong with our son?’.

“There is such a thing as building a fight, that’s no problem, we’re going into fight each other. That takes certain levels of intensity that you have to have. You’re going in there to hurt the guy and he’s going to do the same to you so that’s understandable. But this guy has crossed over the line and I think anybody who has any kind of respect in them, that understands what respect is, will not be on this guy’s side.”

Paulie, of course, had a lot to say about what he was going to do to Lobov and how he is in a different class. It will be interesting to see who will win because it’s a clash of combat sports as much as it is a clash of styles. The MMA fighter against the pure boxer. Paulie had this to say:

“This is the biggest fight of his career and he only got here because he started with me. I’m going to finish it on Saturday. I’m going to pummel this guy like he stole something. I’m going to teach him some manners. I’ve only been talking because of what his crew started. I don’t think there’s a lot to say that hasn’t already been said. This guy is so nervous he’s not going to know what to do when the bell rings.

“This is a growing sport and it was a pleasant surprise to find out the fight would be here in Florida. I have a second home here and spend a lot of time in the state. It feels good to be competing here. I’m not impressed with Artem’s last fight in BKFC. I thought he blew the fight. I thought everyone would realize how bad he is. I’m definitely not second-guessing myself after seeing that performance.”

John - Sep 21, 2021 0
Everyone is aware of how entertaining when Diaz fights inside the Octagon, their transparent attitude inside and outside the Octagon is what makes them...